5 Ways to Not Look Like a Moron in Edinburgh 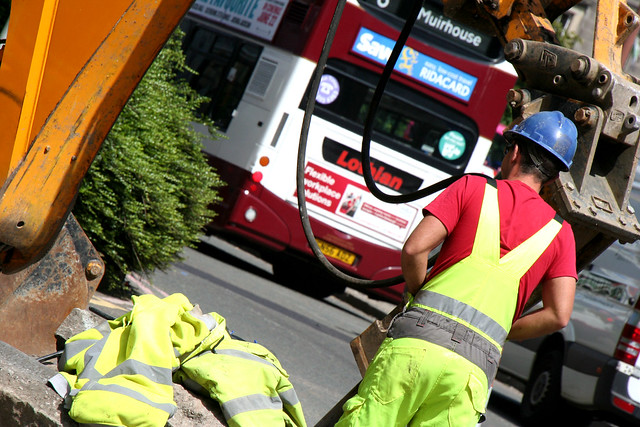 Edinburgh construction (probably having something to do with, ugh, the trams).

While I’m in Edinburgh, it is my goal to live like a local.

You probably already know that having a dog with me has made me feel like a local. Working a pretty regular schedule also goes a long way to making me feel settled. And staying put in Edinburgh for a whole month, rather than traveling every single weekend, also helps. But those are not quite enough. To truly look and feel like a local, you have to know a thing or two about the local norms, the issues of the day, what’s considered usual and what’s not. And, I have been pretty much failing miserably at those things.

That’s why I made a list. Because, if you, like me, want to walk the local walk and talk the local talk in Edinburgh, you can learn from my mishaps. Here are a few things you should know:

1. Look right, not left. Well, this one is more of a survival technique than anything else. If you look left and then cross the street, you’ll probably be hit by a double decker bus, which would be a less-than-delightful end to your Scottish adventures. So, look right, friends. Or at least send me a note about your narrow escapes.

2. If you can’t turn on the stove, look for a light switch. That’s right: if you want to turn on a stove, you probably have to flip a switch (sometimes labeled “cooker”), which opens the electrical socket (or something). To get this tip for you, I spent an hour standing in the kitchen feeling baffled and contemplating whether there were other ways to boil pasta. You’re welcome.

3. Don’t ever confess to washing your clothes in cold water. There are at least two Scottish people who think I’m an unwashed hippie because of this.

4. Bring your own tupperware. Apparently, some of the restaurants in Scotland do not have containers for you to take your leftovers home after the meal. So, either eat the whole thing or bring some baggies and tuck your leftovers in your bag. I got some really weird looks when I asked for the rest of my hummus boxed up. And then a friend told me to take a container with me when I tried the Indian restaurant down the road, as they have big portions. A strange (and yet interesting) idea.

5. Roll your eyes and exclaim “Ugh, the trams” a lot. So, for the past ten years or so, Edinburgh has been attempting to install trams. Apparently, the government tears up the streets, moves around a bunch of piping and then decides that isn’t the right spot or they don’t need the trams that far down or something and fills the whole thing in again. It’s costing tons of money and has yet to yield much by way of positive results. Plus, it means there is ugly, sad construction all over the place. And the Edinburghians want their beautiful city back, damn it! So, if you want to look like you’re in the know, bring up the trams. You don’t even have to say much…the topic will whip your local friends into a frenzy. And, since it’s already taken 10 years and made little to no headway, the good news is that this will be relevant advice for many years to come.

So, there you have it. Go forth. Edinburgh it up like a local.

2019 in photos: one digital nomad’s year

A Photo Essay: Wandering in Girona

[…] the most popular blog post in June was 5 Ways to Not Look Like a Moron in Edinburgh. If you haven’t already, you might want to read […]

[…] I’m on this quest for a place to call home, I am trying to not only live like a local, but also get to the root of each city. I want to know what the people think about, where the city […]

I did a similar thing with the shower in Ireland as you did with the stove. Apparently you have to pull a random string to get hot water. Oh the quirks of becoming a local!

Totally! I have spent countless hours in other countries scratching my head and trying to figure out simple systems…some of which turn out to be not quite as simple as I anticipated and others that make me look like a crazy person for not figuring them out.

Your observations are great fun!

Ooo, I like the idea of bringing your own tupperware! Though if I did that in Korea, I would get some strange looks. No one ever asks to take their leftovers home. It’s just unheard of.

@Audrey – Me too! I only wish I’d known about it before I asked to take home my leftovers. The poor, baffled waiter…

This is hilarious! I can’t tell you how many times I almost got hit trying to cross the street in Ireland. You would think I would have learned that quickly…

@Dalene, yeah, I think I’m lucky I made it out alive.

[…] favorite posts: 5 Ways to Not Look Like a Moron in Edinburgh How Much Does a Trip to Scotland Cost? Excuse Me, There’s Something in Your […]

[…] my quest to live like a local wherever I travel, I often find myself a bit out of my element. You know what I mean. Eating grub […]

I’ve only just discovered your blog through Candice Walsh but I love it! And I particularly love this post, as I moved to Edinburgh in May and it is very true!!! Especially the bloody stove. I was convinced my Spanish flatmate had broken the damn thing.

Thanks! Yeah, the stove thing was a particular low point.

[…] readers really liked: – A Manifesto on Babies (Or Lack Thereof) – 5 Ways to Not Look Like a Moron in Edinburgh – Photo Essay: Hiking the Black Forest – The Beginner’s Guide to German Sausage – I Want to […]

Watch out for outlets – who would ever think it makes sense to put an on/off switch on every outlet? And in New Zealand the light switches work the wrong way.

An odd place this world where things don’t work as expected….

Good to know about New Zealand. It’s pretty high up on my list of dream spots to visit, so thanks for the tip.

As a native Edinburger I think you’ve got it spot on! Not jumping when the one o’clock gun goes off is another biggie.

[…] As usual, my goal in Paris was to live like a local—to know a thing or two about the local norms, interact with my neighbors, really settle in, and get a sense of Paris. […]

Just discovered your blog while wondering why we couldn’t take home our leftovers from the World’s End. Love the Tupperware suggestion!!

[…] taking trips to Target every other day, and working on some really cool new projects. And, in an opposite approach to my normal travel style, I’m also trying to spend some time experiencing Colorado as a tourist instead of a local. […]