6 Things I Really Couldn’t Camp Without

Luna gives the cool weather sleeping bag the thumbs up as soon as it arrives.

If you’ve been following my journey, you know that this September I did something out of the ordinary.

You see, normally I rent furnished apartments everywhere I go. I find that having an apartment to go home to grounds me. Makes me feel at home. Plus, it’s cheaper, not only because long stays in furnished rentals are relatively affordable, but also because I eat out less and can take home leftovers when I do.

But in September, I decided to spend a whole month in the Swiss Alps – and all the apartment rentals I found were more than 50% over my housing budget.

Still, I was determined to vacation in the Bernese Oberland.

Which is why I decided to spend the month living out of a tent at a well-kept campground (which came in just under budget for the tent pitch).

Of course, I didn’t make it the whole month. Because after 20 days of springing leaks in the tent, carrying my medications and electronics around with me so that they wouldn’t melt or get damaged in the heat of the day, and having to walk outside in the rain to get to the bathroom, I gave up and retreated to the warmth and simplicity of a surprisingly affordable hotel I discovered in town (more on that later).

I discovered that though I love camping during an adventure (while hiking pieces of the Appalachian Trail during college or backpacking into the wilds to stay overnight on a mountaintop, for example), I don’t necessarily love camping just for camping’s sake. If I’m not in the wilderness, I’d rather trade my tent for a warm, inviting room.

That said, I did learn a lot about what makes camping comfortable if you do have to tent it in town and today, just in case it’s useful, I thought I’d share the six things that made camping in town 1000% better that it could have been. 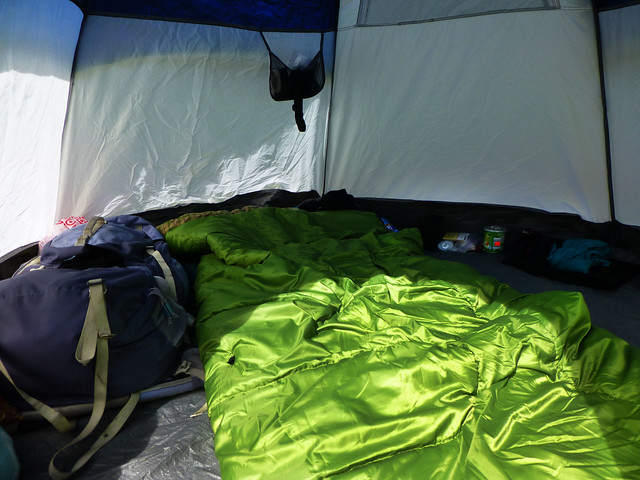 1. Small lock. Tents aren’t easily fortified, so I don’t suggest leaving your valuables in one. However, if you do want to discourage potential looters, a little luggage lock on your zippers can go a long way. After all, the RVers next door might not think anything suspicious is happening if someone just unzips your tent and walks in, but they’re bound to notice if the person is standing around trying to crack your lock or slashing your tent open with a pair of scissors.

Simply put, my little luggage lock made me feel safer. Both when I was away and when I locked myself in at night.

2. Eye cover. I normally don’t even carry one of these, but I had a free one from my international flight and decided to hang onto it for a while. When it came time to get some shut-eye, I was really glad I did. Because tent fabric really doesn’t block out light.

3. Wide and tall sleeping pad. The width of a normal sleeping pad doesn’t even accommodate my shoulders, which doesn’t make any sense to me, particularly because I’m a petite girl. So instead of buying a normal-sized one, I went for the extra large version with its few extra inches of width (and tons of extra height that completely went to waste). It was so much more comfortable to sleep on something that I didn’t feel like I was going to fall off of during the night. And, with Luna in the sleeping bag too, I’m not sure how we would have managed with anything less.

4. Cloth cool weather sleeping bag. I used to have a sleeping bag out of those synthetic materials that make you start sweating the second you touch them…and I kind of hated it. This time I got a cloth sleeping bag, which was way more comfortable and roomier (which works out better if you have a dog that plans on sleeping snuggled up against your waist inside the bag). The only downside? It’s a bit bulky. But, for me, it was worth a little extra bulk to sleep comfortably.

5. Headlamp. Even though I was at a campground (and a relatively well-lit one), it helped enormously to have a little flashlight. And I like that with a headlamp I can have my arms free.

6. A small, snuggly puppy (which doubles as a sleeping bag heater). Obviously camping adventures (like many other types of adventures) are just better with a furry companion. 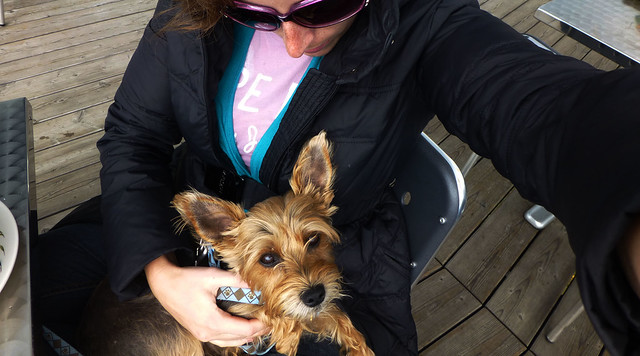 Do you camp? What could you simply not live without?

A big thanks to Coleman, who sent me a free sleeping bag to try out.

You’ve just created a great resource. :-D
I don’t camp – would if I had to, but not by choice… however, you make it look a little better than I thought.

It’s not too bad if you have a glamorous campground and the right tools. But definitely don’t do it in the cold and rain!

I normally dont camp that much but, when I do I could not live without snuggling next to my daughter again serves as a sleeping bag heater. She is only 4 so it works out ok.

My family and I find time to go for a camping especially whenever there is a long holiday. This keeps us know each other more. What I couldn’t live without maybe is a durable and bigger tent that fits not only the people who will be sleeping inside but should also have that space enough to put the other things you have. A good shelter matters if you mean, a good camping experience:)