The best part of being in Switzerland all summer is simply this: The glorious hiking.

From high-Alpine treks above the tree-line to forested strolls through gorges and over waterfalls, I really can’t get enough of hiking in Switzerland.

Which is why when we decided this year we were going to explore more of the French part, my first quest was to figure out where we should walk.

For our overnight trip to Nyon on Lake Geneva, the answer was a trail called Sentier des Toblerones. 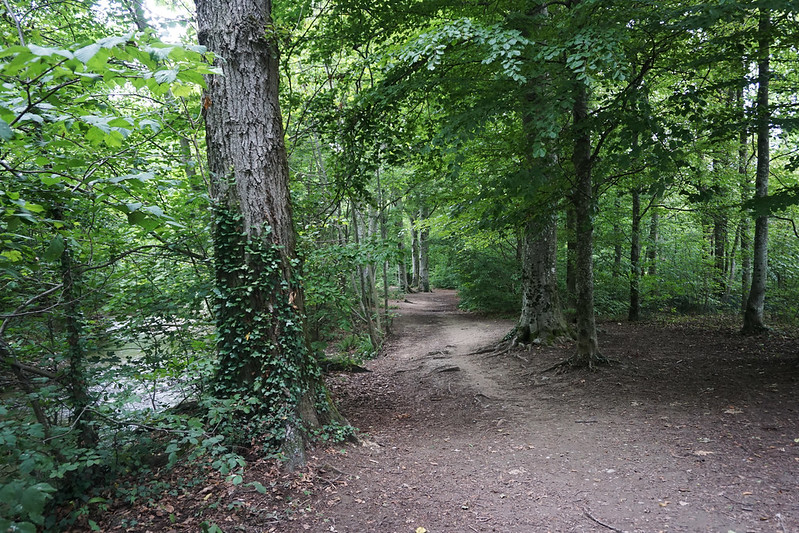 Sentier des Toblerones is so named because it follows an overgrown anti-tank line and some of the anti-tank fortifications look a whole lot like the chunks you break off a Toblerone chocolate bar.

The hike starts in Nyon and makes it way a little past Bassins. We had some time constraints, so we started our hike from Gland (which cuts hiking time by about 40%, as I understand it). The prettiest part of the hike started in Vich, so if we had to do it over, I might skip the short bit between Gland and Vich (which meanders through the city and past construction noise). 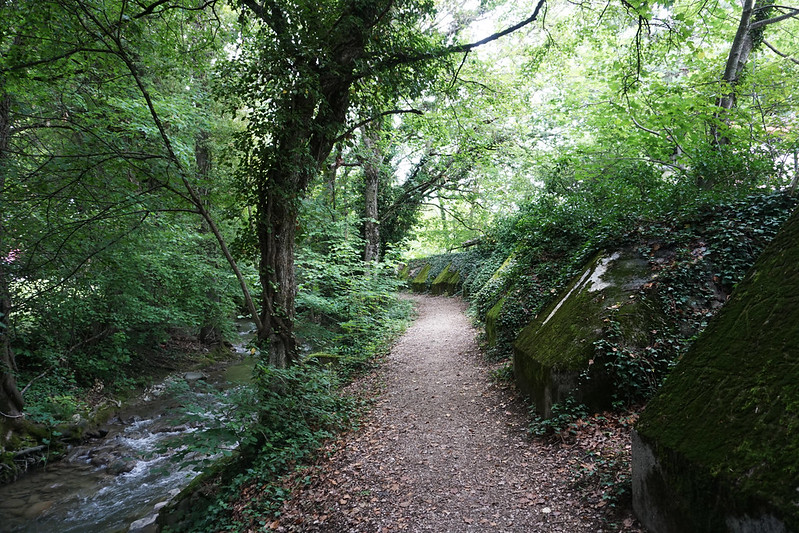 Despite some navigational difficulties (the trail isn’t well marked), it’s a very pretty hike. Especially if you, like me, love old abandoned things that have been reclaimed by nature.

If you do this hike, expect long stretches of cool forest, wooden bridges built along fortifications, pillboxes overgrown with ivy, and a burbly river to keep you company much of the way. 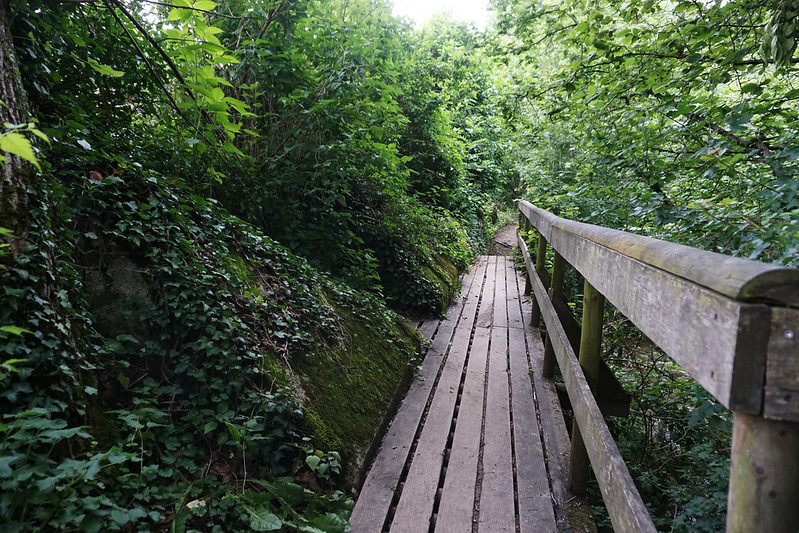 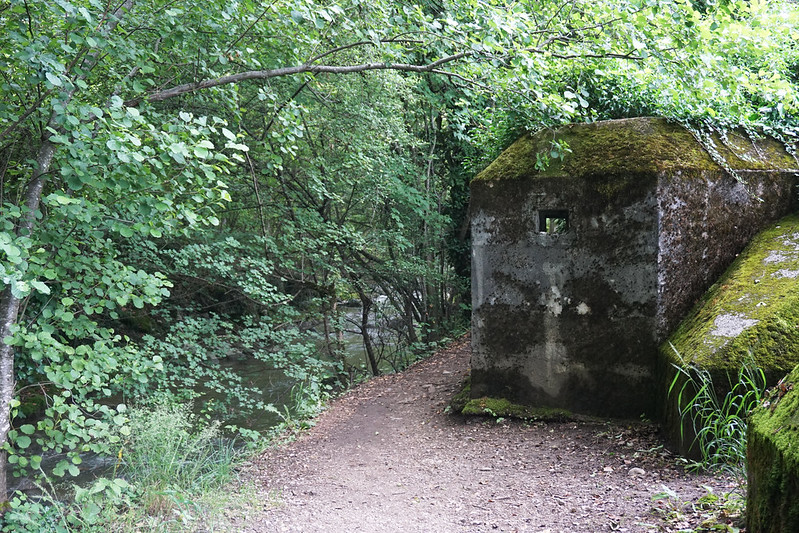 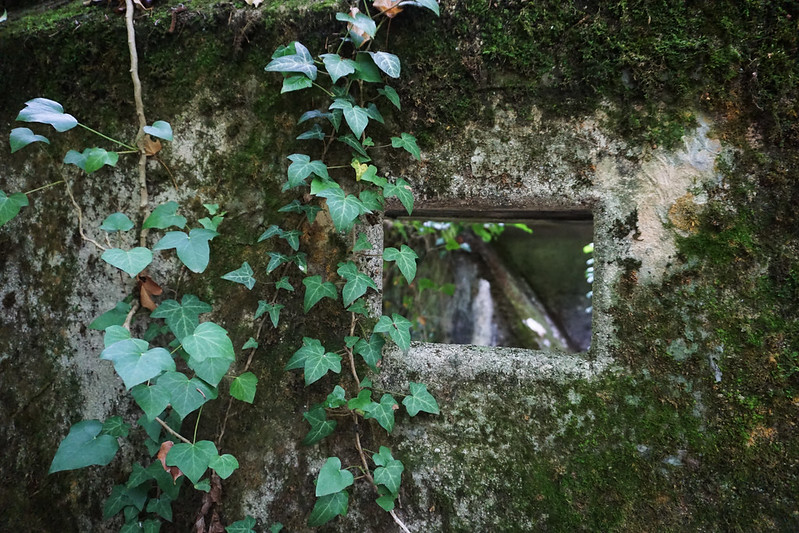 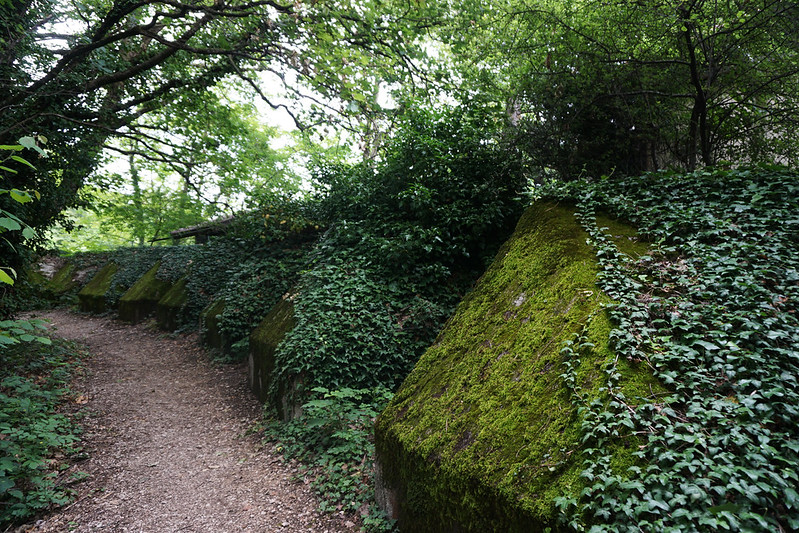 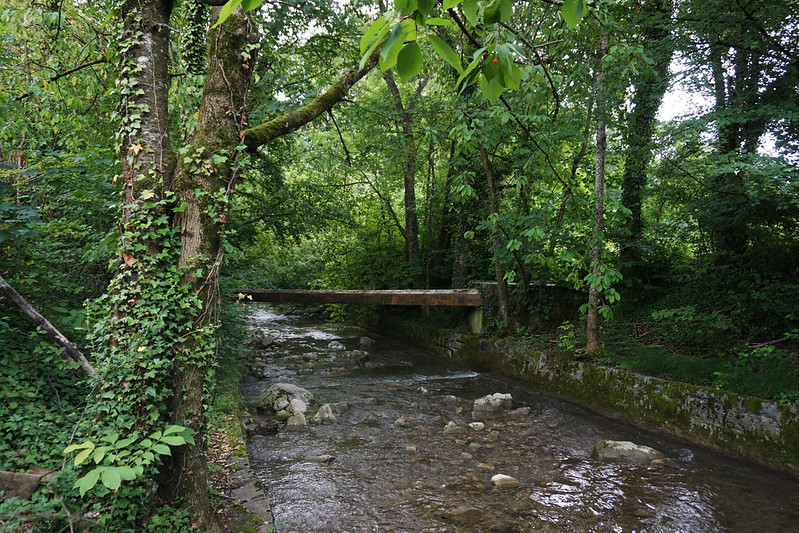 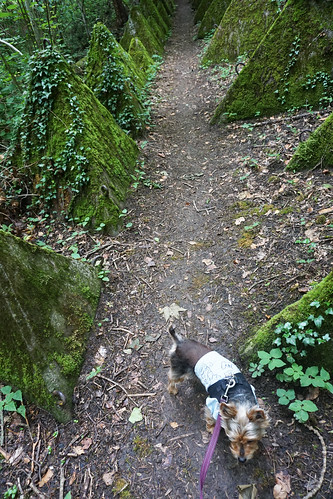 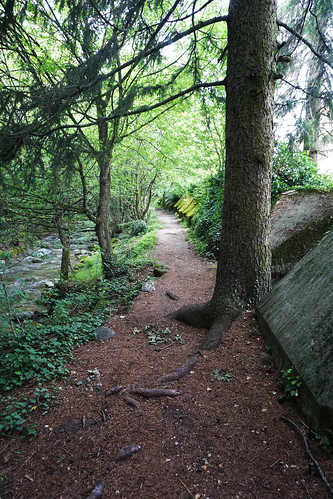 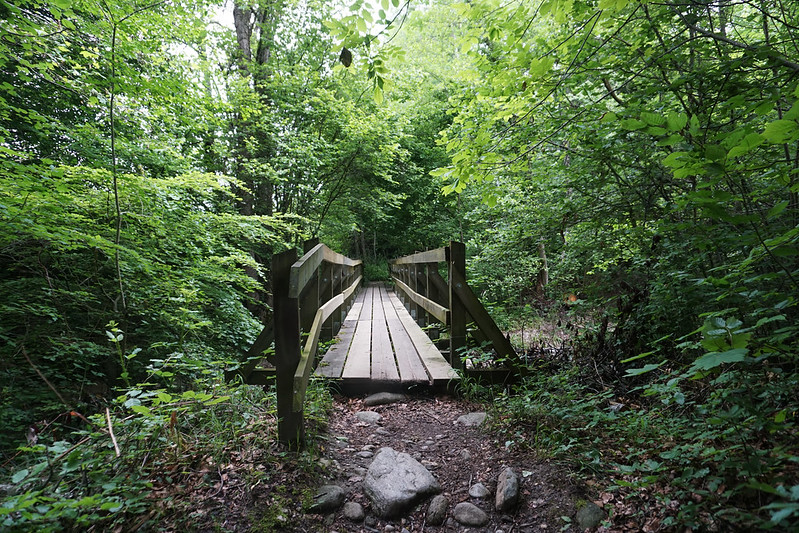 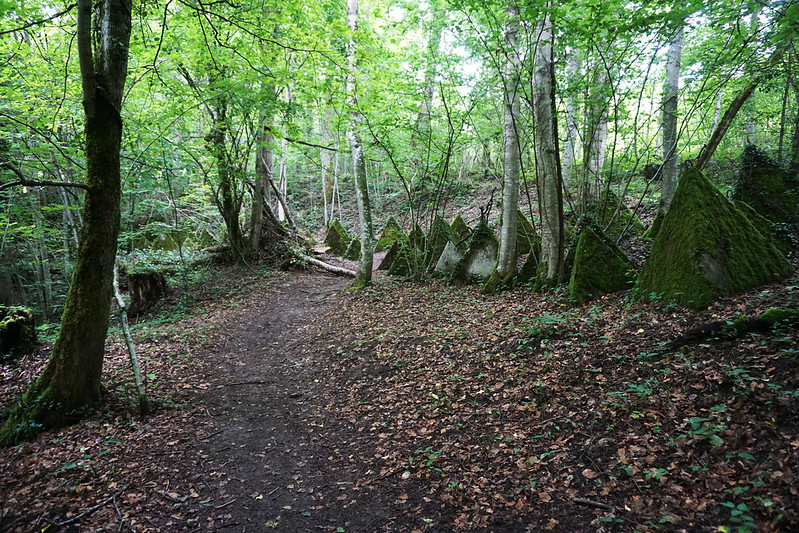 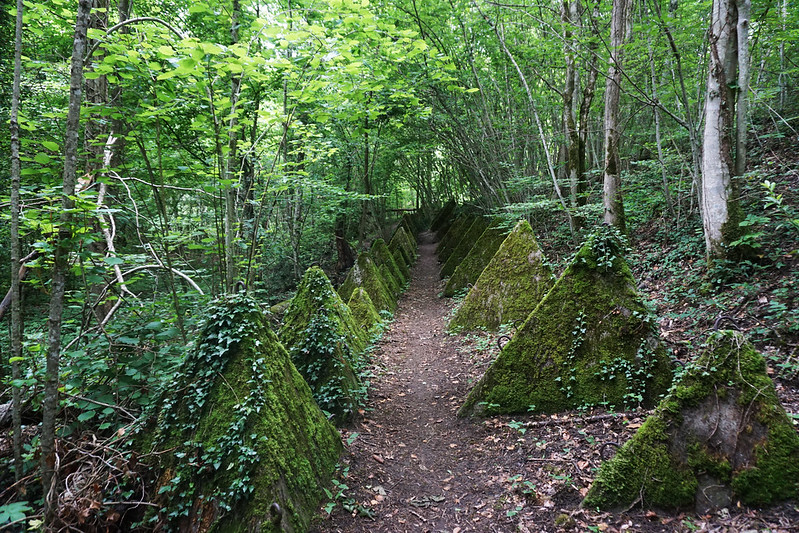 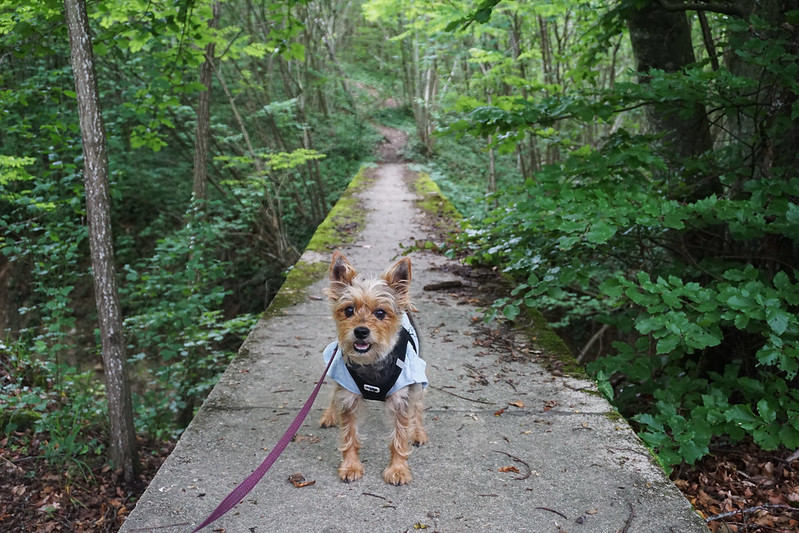 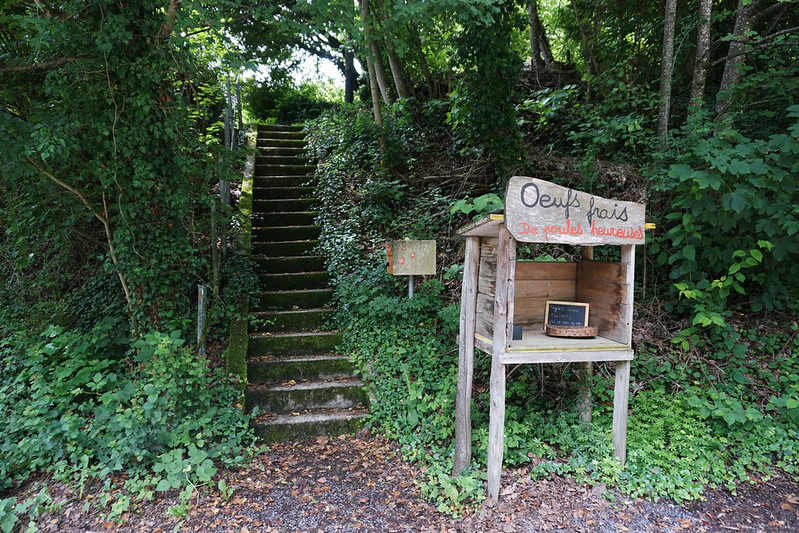 If you’re planning to take on this hike yourself, here are the relevant details:

The tricky part of this hike is that it isn’t that well marked.

The toblerones are easy to follow, as they’re huge, but at times the hike meanders around or away from them and in most of these cases we had to pause a few times to figure out if we were going the right way (hiking signs mark the way, but it’s sometimes unclear which fork in the road they’re indicating or whether you’ve wandered onto another nearby trail).

Once, we somehow ended up in someone’s front lawn. Another time we also meandered off the trail and into a vineyard (before we spotted, behind us, a trail marker we’d missed). And somewhere about 45 minutes from Bassins we took the wrong fork in the trail and followed another trail (with no fortifications in sight) the rest of the way to the top.

If I had it to do over, I’d have looked into getting an official map (normally we don’t need them in Switzerland since the trails are so exceptionally well marked).

We left Gland around noon and made it to Bassins before three. But keep in mind that we got lost and took another trail to Bassins the last 30 – 45 minutes. I believe the official trail is about twice as long on that section.

Transportation to Gland from Nyon was simple: A train runs every 30 minutes and it’s about a 3-minute ride. According to Rome2Rio, if you’d like to go from Nyon to Vich (to start the prettier portion of the hike), there’s a bus every couple hours and it takes 16 minutes to get there.

Transportation back to Nyon from Bassins includes a train (which stops on request, so make sure you are visible on the platform so that they’ll stop to get you) on one side of town and a bus on the other. Because of our navigational difficulties, we ended up taking the bus (which comes hourly) back to Nyon train station.

Dogs are welcome on Swiss trails. Make sure you clean up after yours and keep an eye out for hawks if you’ve got a small pooch. We saw a lot of birds of prey on this particular day and kept Luna on a leash in open-air areas.

Wear good hiking or trail running shoes (I like Salomon women’s speedcross) and bring a jacket and poncho if there’s any chance of rain. The weather here can change on a dime.

Don’t forget to load up on water. We did not see any potable water fountains along the route.

Since I’m hiking with a middle-aged small dog and occasionally she’s had some knee issues, I also hike with a dog backpack. Here’s the one I’ve been trying out (and like so far).