Popular posts
The cost of traveling Europe: real budget numbers from 9+ years of travel
A creepy Halloween cover reveal: The Wicked Unseen is here!
My secret news: I wrote a novel for Netflix!
The most (and least) dog-friendly countries in Europe
The most (and least) hiker-friendly countries in Europe
The ultimate guide to Europe’s digital nomad visas
How we define disability (and how maybe that needs to change)
How I make money while traveling the world full-time: behind the scenes with a...
So You Want to Freelance? Here’s How to Set Your Hourly Rates.
I Have OCD. This Is What It’s Like.
luna the traveling pooch

In the past nine years of travel, it’s a place we’ve gone back to over and over again, spending months upon months exploring coastlines and islands, fortresses atop mountains, abandoned hotels, and the many hidden corners of Zagreb.

After all that travel, I’m happy to say that Croatia is a pretty dog-friendly place. Not as dog-lovin as some of Western Europe, but much more dog-friendly than the US.

Here are the deets: 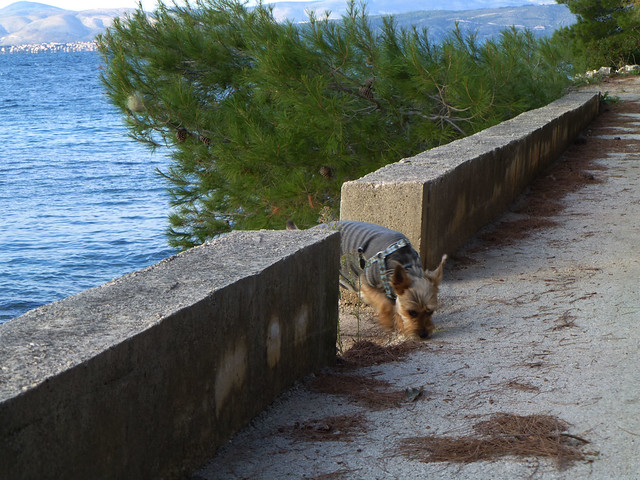 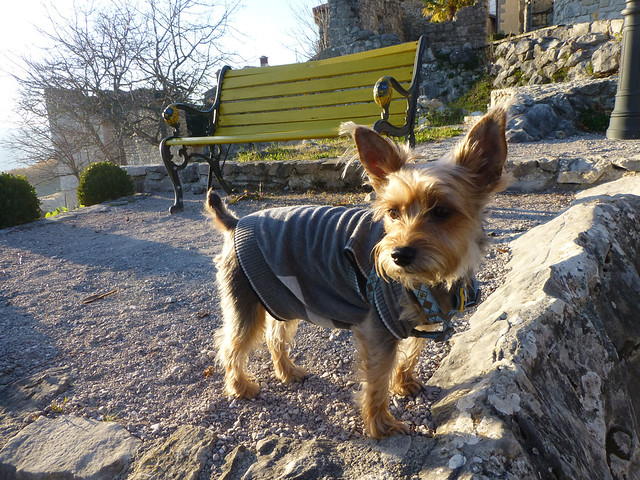 Finding dog-friendly rentals in Split, Zagreb, Dubrovnik, Plitvice Lakes, and pretty much everywhere else I’ve done has been incredibly easy. Almost every single apartment I wrote to either already accepted dogs or was willing to make an exception for a small, well behaved dog.

My strategy is always to ask owners (rather than trying to filter by pet-friendliness), as many who normally don’t take dogs will take a small, well-behaved,  non-shedding one. 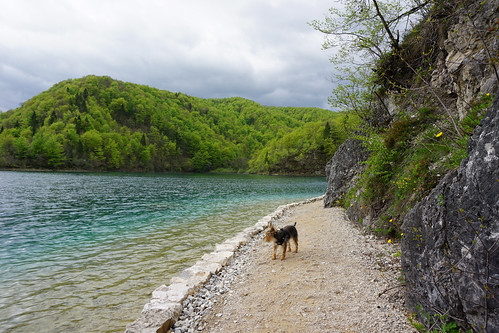 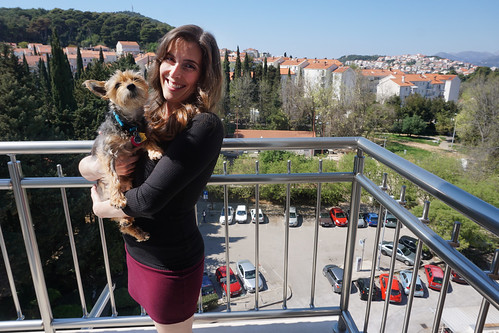 I’m also happy to report that Croatians seem to be a dog-loving people. The Split Riva (the walkway along the harbor) is constantly full of people walking their dogs. The big, beautiful park just south of Rovinj was also full of dog-walkers. Zagreb’s Maksimir Park is dog central. And people are friendly and often come to say hi to Luna wherever we are hanging out.

That said, Croatia is a little more confusing and less easy-going than Western Europe in several ways. The first: there are no-dogs-allowed signs in a lot of places. They’re in the parks, on the doors of the ferry sitting area, on many of the beaches. And here’s the confusing part: everyone completely ignores them. The Croatians are constantly walking their dogs on the beaches right next to the signs. And when I asked someone about it, he waved me away nonchalantly, saying that those signs were only for the very busiest parts of the season. For the most part, he said, the signs aren’t even enforced in the summer…and they definitely aren’t enforced in the off-season.

Ignoring the signs made me nervous, but it seems to be a cultural norm and I eventually gave in with no ill consequences.

The main place that I ignored the no-dogs signs was in the ferry sitting area. Dogs ride free on the ferries and in the winter it’s too cold to sit outside on the deck (where there are no signs). So Luna and I settled in the indoor ferry sitting area – and no one batted an eyelash. 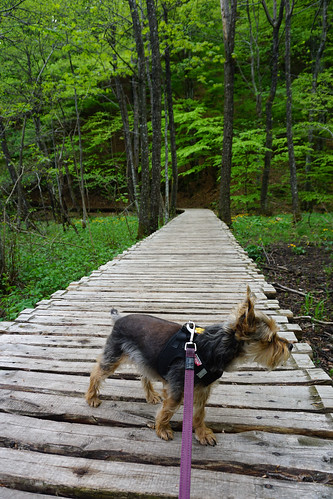 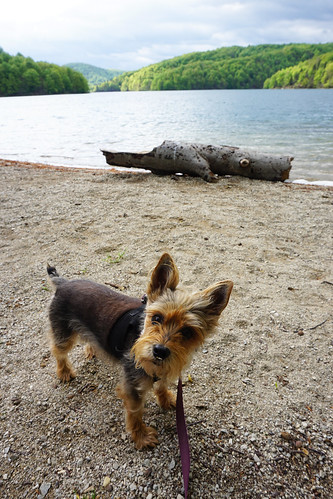 Dog supply stores are also easy to come by. In Split, I found a really great one (with hypo-allergenic dog food!) at Prvanova Ulica 3, Split 21000, walking distance from my apartment. In Rovinj, I had to go a little farther to find a supply store, but it also seemed well outfitted. The Rovinj shop was next to the Mercator Shopping Center. In Zagreb, the big Pet Centar (Heinzelova ul. 60) has pretty much anything you could need.

We didn’t need a vet in most of our locations, but did use the Veterinary College in Zagreb when Luna had some issues this winter (2021). They’re very busy, so expect to wait a long time even if you have a pre-set appointment, but the care is good and the facilities cover pretty much anything  you need. 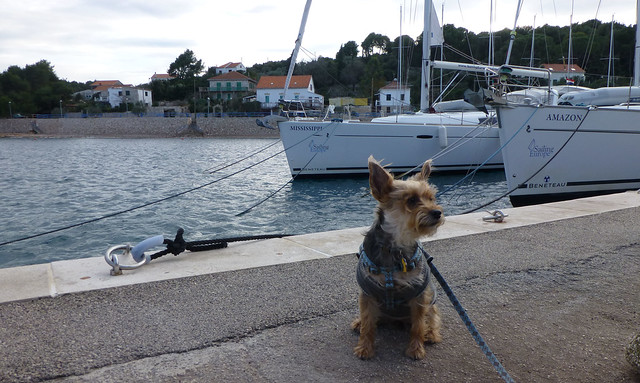 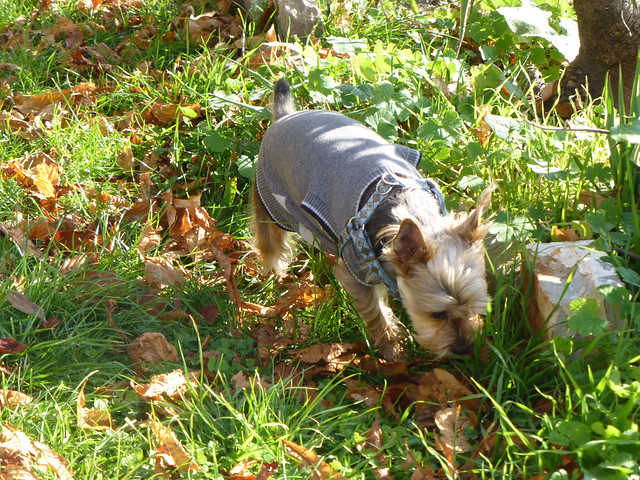 The second less-dog-friendly thing was the Croatian bus system. If you want to take a long-distance bus in Croatia, you can’t buy a ticket ahead of time because it is up to the individual bus drivers whether they allow you and your pooch onboard. For planners like me, this can be a bit annoying, especially since the trains in Croatia barely go anywhere and buses are often the only option.

Luckily, most of the bus drivers we encountered were fine with a small, quiet dog in a carrier. But I still don’t love the you-must-wait-till-the-last-second system they have in place.

The final not-so-dog-friendly thing is the restaurants and bars. For the most part, you don’t see dogs inside them (unlike Western Europe). On the island of Solta, we found one darling, family-owned restaurant that made an exception for Luna, but generally I was told to leave the dog at home (unless we were sitting on a patio, which it’s really too cold to do in winter). 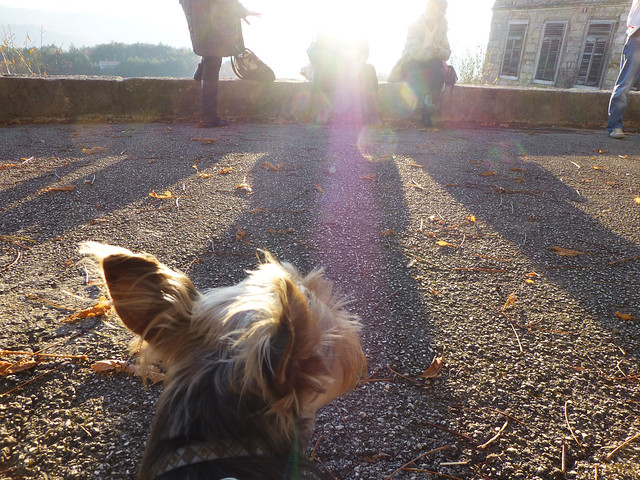 In which Luna tries watermelon for the first time

A Small Dog’s Guide to Spain

Ask Me Anything: How Do I Take My Dog to Europe?

How to Take Your Dog from the US to Mexico

Try Bulgaria sometime. A beautiful country, laughably cheap. The dog was allowed almost everywhere. In restaurants staff almost invariably came out to give little treats to Eddie the Beagle. Hotels were generally welcoming.

Thanks for the suggestion. We will eventually get to every European country I hope. :)

I always love updates about little Luna. Hope you’ll have time to do a Portugal update on dog pros/cons! Hopefully there are more pros than cons.

[…] In addition to the US, Luna has been to Mexico, England, Scotland, Belgium, Germany, Switzerland, France, Spain, Italy, and Croatia. […]

Im happy to hear you had a pleasant experience while in Croatia. Im taking my dog with me to Rovinj this summer. Hopefully, everything is going to be fine just as you described it. Though, I wonder if there are lot of stray dogs in Rovinj? Im little worried about that.

I didn’t notice any, but it’s been a couple years, so I guess there could be. I wouldn’t worry too much about it. We ran into lots of strays in places like Mexico, but never in Croatia.

Awwww… this is just too adorable for words! =)

Great post! I’m going to be traveling with my cat all over Croatia and Montenegro and have been having the worst time trying to figure out if they’ll let us on the bus! Which bus company did you end up using? Did you have to just show up, present your dog and wait for approval from the bus driver?! I’m a planner myself and that sounds like a nightmare. Thank you!

I don’t remember the name of the bus company (I think there was only one bus running to the place I wanted to go, so didn’t note the name) and, yes, it was up to the bus driver. I don’t know about Montenegro.

You may already know, but another important thing to note about Montenegro is that to come back intro Croatia, you need a titre test, as Montenegro is considered high-risk for rabies.

Do you happen to remember which bus you took into Croatia? We are in a similar situation (time running out) and I have a small dog like Luna. We would be coming from Italy, though. The idea of taking a train to the border and then being told no is a little scary to me

I actually only took a bus out, not in (I took trains into Zagreb to get in both times I’ve been). Unfortunately, there are no overarching policies for any of the bus companies that I can find. It’s up to each individual driver. :( Most of the time, the drivers say yes, but the one tricky thing about Croatia is that there is that small chance they’ll say no. If you’re nervous, consider taking the train instead. No one even glanced twice at Luna when I entered by train (both two years ago and a couple months ago).

Love all your posts about traveling with your pup! We followed your advice in Malaga Spain and now Croatia! Keep the posts coming :)