What to eat in Switzerland: 9 must-try dishes according to Chef Andreas Caminada of Schloss Schauenstein

This post contains affiliate or sales links.
Browse Pellegrino’s list of 50 best restaurants in the world and nestled at spot #47 you’ll find the only Swiss restaurant on the list: Schloss Schauenstein.

It’s been on that list for years and Pellegrino isn’t the only one who thinks Chef Andreas Caminada’s food is worth a special trip. French restaurant guide Gault Millau gives the restaurant 19 out of 20 points. And Michelin continues to give it three stars year after year (alongside two other three-star restaurants in Switzerland: Cheval Blanc in Basel and Restaurant de l’Hôtel de Ville in Crissier).

In late January, an interview with Chef Caminada, originally published in Switzerland: 100 Locals Tell You Where to Go, What to Hike, & How to Fit In, was re-published here. In that interview, the chef is asked what to eat in Switzerland, and he makes nine suggestions. (He was also asked where to eat and you can find those restaurant suggestions here.)

In case you’re making your list of Switzerland must-eats, here are all nine suggestions with some additional background on what they are, why they matter, and which ones I’d push to the top of your list.

What to eat in Switzerland according to Chef Caminada

Pots of hot cheese for dipping are a decidedly Swiss (and French) dish and probably the one you’re most likely to have heard of. Fondue gained its popularity because of (wait for it): advertising! The Swiss Cheese Union threw its weight behind these cheesy hot pots in the 1930s, promoting them as Switzerland’s national dish. After the war, the union kept up its efforts and sent fondue kits to the troops. The ad campaigning worked wonders and by the ’50s fondue had made its way to the States (where USers thought “I bet this would be great with chocolate,” though that’s a story for another day).

Before that, fondue was a smart trick for making bread taste better once it had started to go stale. Heat aged cheese with wine, garlic, and herbs and – voila! – you’ve just found a way to soften up stale bread (and make any crunch from staleness matter a whole lot less).

Now, here’s the thing: despite having lived in a Swiss region known for the dish for two years, I haven’t found a spectacular fondue. This has left me with a sneaking suspicion that it’s one of those things that can be done well but is often done poorly.

Then again, how poorly can you really do a pot of cheese? I’ve never had a bad fondue. I’ve just never had one that wowed me either.

Raclette can mean two things in Switzerland: The first is a semi-hard, salted cow’s milk cheese (this was the original meaning). This cheese was traditionally melted at the fireside and then scraped, fabulously meltily, over potatoes, onions, and pickles.

Which brings us to the second meaning: as that traditional fireside mountain dish became more popular, a special grill was developed for those who wanted to melt their own excellently smelly, flavorful cheese while grilling meat, veggies, onions, etc. to serve it up on. The word Raclette these days sometimes also refers to the grill itself, which works like this.

Switzerland’s most well known cheeses are probably Gruyere and Emmental, two hard cheeses from the French-speaking part of the country that you’ll also see in US grocery stores. But in a country so obsessed with its cows, it’s not at all shocking that every region has its own cheeses to present.

I’m personally a fan of Berner Alpkäse – hard, raw-milk cheese produced and aged in the Alps. One of Switzerland’s most charming features is the many opportunities to buy this cheese directly from the cheesemakers along hiking trails throughout the Bernese Oberland. Watch for small huts or chalets, vending machines in the middle of nowhere (yes really), or small fridges set up outside houses on the edge of the trails with honesty jars beside them. Take what you need. Leave the appropriate amount of francs in the honesty jar. And enjoy.

You can also make your way to the Bern farmers market for unusual varieties like pine-needle cheese. 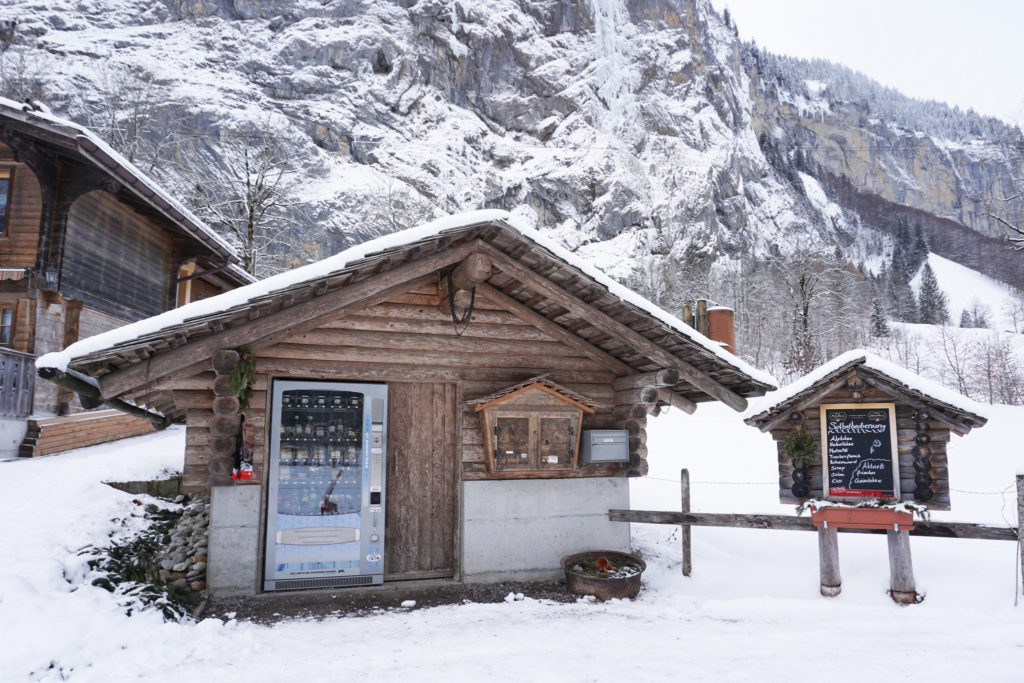 A vending machine featuring alpkäse alongside jams, syrups, and other homemade goods.

According to Chef Caminada, “You can’t go wrong with a lovely, fruity white from the French-speaking part of the country or a Pinot Noir from the Bündner Herrschaft in the canton of Graubünden.”

I’ll add to that that this little vineyard in the small lakeside town of Spiez is doing interesting things with its wines. The tasty new varietal they developed a few years ago is called eSCAPAde and tastes a bit like a Sauvignon Blanc with elderflower, cassis, gooseberry, and citrus.

While risotto is Italian, so is the canton of Ticino. It’s Swiss, yes. But it speaks Italian. Eats Italian food. And feels like a slightly more organized version of Italy where the trains run on time. For the best risotto, ask around for the best local grotto (tavern).

6. Raisiniée from the French cantons

Slow simmer pear or apple juice over an open wood fire for days on end until it thickens into syrup and you’ve got yourself raisiniée. Originally, in the Middle Ages, this thick, sweet syrup was used as a sweetener. Today, they serve it up with crepes, meringues, or ice cream as a dessert in its own right.

Chef Caminada recommends having some with crème fraîche or ice cream.

7. Rösti in the German cantons

This former farmer’s breakfast dish is essentially the Swiss version of crispy hash browns. To make it, you start with coarsely grated potatoes, pan fry them with salt and pepper, and shape them into patties. In most restaurants, this is how it’s served – a crispy cake on the side of some other meal.

But, of course, a few restaurants have pushed the foundational dish farther.

Some serve it with bacon, fresh herbs, cheese, or onion mixed in. Still others, like the Hotel Oberland in Lauterbrunnen, offer a variety of gourmet röstis with grilled pork sausage and mushroom sauce, grilled veggies, or ham, mozzarella, and minced beef sauce. Chef Caminada’s top gourmet rösti pick in the interview was Kronenhalle in Zürich.

Despite the efforts of the Swiss Cheese Union to elevate fondue above all other Swiss cuisine, many locals consider rösti the national dish. 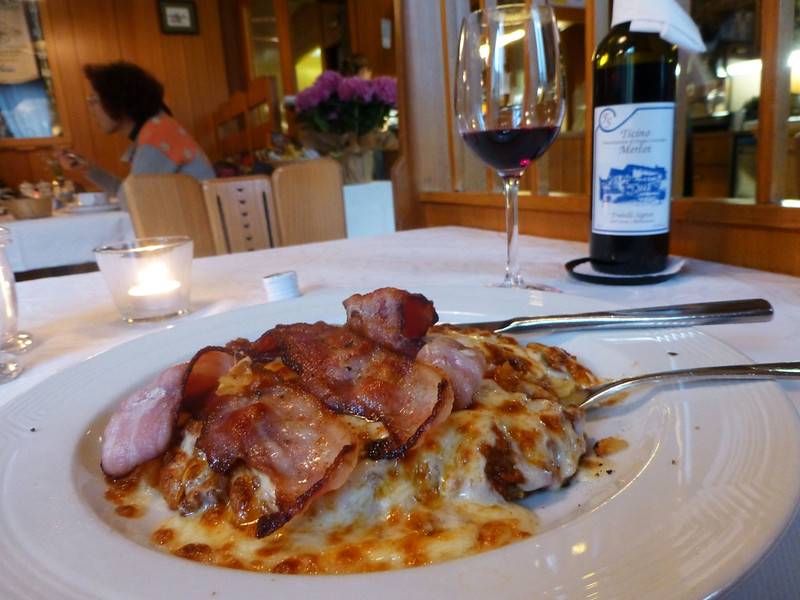 Trucker Rösti at the Hotel Oberland in Lauterbrunnen.

In Chef Caminada’s home canton (Graubünden), his must-try traditional pick is capuns. The name always conjures up visions of green vegetables for me, but the truth is that capuns are anything but a veggie dish. (There is a little Swiss chard involved, but not enough to make this a veggie-centric dish.)

The neatly rolled bundles start with spätzle dough (an eggy pasta dough) and meat filling (tradition says sausage or dried beef, but every family and chef has their own favorite filling). They’re wrapped in chard leaves, boiled in gravy, and served up with cheese. The Swiss tourism site has a recipe if you’d like to try making it at home.

The chef specifically recommends the capuns at Hotel Gasthaus Krone near the glitzy ski village of St. Moritz.

Switzerland’s version of a meat pie, this puff pastry is stuffed with veal and mushrooms and served up at restaurants or as a takeaway dish in Lucerne’s many bakeries. Lucerne is worth a visit anyway, as the chef notes, for its stunning city center and views.

February newsletter: Georgia and other disasters