Ask a Local: What and Where Should I Eat in Switzerland?

Welcome back to Ask a Local, a series of posts in which I interview locals all over the world about what to see, where to go, what to eat, and how to fit in in their city or town. The following interview with Switzerland’s top chef, Andreas Caminada, was originally published in Switzerland: 100 Locals Tell You Where to Go, What to Hike, & How to Fit In. For more interviews with top chefs and other experts, check out the full guidebook. This post contains affiliate and sales links.

For the last 10 years, I’ve been the chef and leaseholder of the Schloss Schauenstein Hotel and Restaurant in Fürstenau. The restaurant (which is in a historic castle) holds three Michelin stars and 19 Gault Millau points. I’m also proud of the fact that we’re on the S. Pellegrino list of The World’s 50 Best Restaurants, which is a very special kind of honor.

I was born and raised here in the canton of Graubünden and am very attached to my home. Like most people here, I’m a down-to-earth sort of guy. I do my own thing in the kitchen. My cooking philosophy is inspired by French cuisine but retains a local touch with ingredients sourced from the sunniest valleys in Graubünden.

My aim is to serve a modern, light cuisine that makes optimum use of top-quality products. But the most important thing is giving guests an all-round experience that goes way beyond what’s on the plate.

When it comes to food, we have a lot to offer. But let’s start with the classics:

Switzerland means cheese, so a cheese fondue or raclette is a must. The best places to enjoy a good fondue are the mountains of Valais, the Bernese Oberland, or Graubünden.

Fondue is made using regional cheeses and tastes different every time you eat it. First, because the cattle spend the summers up in the lush alpine meadows and, second, because the mix of cheeses used varies widely.
  
Don’t forget to try the regional cheeses as well; with a good glass of wine, they are the perfect way to round off a meal.

Something else you have to try is Swiss wine. Hardly any other country makes such intensive and varied use of its vineyards. You can’t go wrong with a lovely, fruity white from the French-speaking part of the country or a Pinot Noir from the Bündner Herrschaft in the canton of Graubünden.

Let’s take one specialty from each language region. A well- made risotto (a creamy rice dish) from Ticino, the Italian-speaking part of Switzerland, is always good. The rice should still be slightly firm when you bite it and is usually best in one of the traditional grottos (simple taverns in hidden-away places).

In the French-speaking cantons, I’d go for raisiniée. This is made by slowly simmering pear or apple juice over an open wood fire for days until it turns into a sticky, thick syrup. Serve it with crème fraîche or ice cream and it’s a showstopper.

A decent rösti (the Swiss version of hash browns) belongs on any list of dishes you simply have to try in German-speaking Switzerland. Around Bern, a traditional rösti is nice and crispy, but the one served with sliced veal and mushrooms in cream sauce at the world-famous Kronenhalle (at Rämistrasse 4 in Zürich) is as good as it gets. This traditional establishment has been a popular haunt of the great and the good for a century and has the most unbelievable collection of art you’ll ever see in a restaurant.

One of the specialties in Graubünden is capuns. These are made of spaetzle dough with sausage and bacon wrapped in chard, but ultimately the filling is up to the chef. They do very good capuns at the Hotel Gasthaus Krone (at Via Cumünela 2 in La Punt Chamues-ch near St. Moritz).

As good as our everyday local cuisine can be, you should also make time to visit to a top-level restaurant. Switzerland has the densest network of Michelin stars in the world.

A Travel Itinerary for Foodies

The best idea is to cross the country visiting each of the language regions in turn. In French-speaking Switzerland, consider starting in Crissier at Benoit Violier’s three-star restaurant (at Rue d’Yverdon 1). It doesn’t get much better than that.

Lucerne should also be one of the stops on your journey. The city has lots of tourist attractions, including its hallmark, the wooden Chapel Bridge. One of the regional specialties there is chügelipastete, a puff-pastry shell filled with diced veal and mushrooms in a creamy sauce. Try it at a restaurant or as a take-away from one of the city’s bakeries.

Consider ending your journey in Graubünden with its breathtaking mountain scenery. The best way to travel and take in the scenery is with the Rhaetian Railway. The various routes take in some of the most spectacular views in the entire region, as well as cosmopolitan centers like St. Moritz.

The list is long, but if you’re planning to discover Switzerland’s best places to eat and you’re starting off in the French-speaking part of the country, your first stop should be Benoit Violier’s Hotel de Ville in Crissier (mentioned above).

Moving closer to German-speaking Switzerland, I think immediately of the Parkhotel Vitznau (at Seestrasse 18 in Vitznau).

Once we get to Zürich and the surrounding area, there’s the Kronenhalle (at Rämistrasse 4 in Zürich) and the Grand Hotel Dolder (at Kurhausstrasse 65 in Zürich), which has a long and fascinating history.

In Graubünden itself, there’s the Hotel Gasthaus Krone in La Punt Chamues-ch (mentioned above).

These are all restaurants that serve well-made, honest food with fresh, seasonal products. But these really are just a few off-the-cuff tips, and there many, many more very fine restaurants that I could recommend. My advice, then, is to get hold of the Michelin Guide for Switzerland, which lists all the country’s best places to eat. It’s available at any good bookshop and is published annually.

Connecting With the Culture

The Swiss can be a little introverted, but at heart, we’re friendly and hospitable. Having four national languages makes us pretty unusual and encourages tolerance, cosmopolitanism, and an understanding of other cultures. However, having said that, I wouldn’t recommend drinking Coca Cola with fondue (we never would).

The easiest thing to do is grab yourself a good piece of bread, some bündnerfleisch (air-dried beef), and a decent glass of wine and watch the sun go down over the Alps, an experience guaranteed to be unforgettably authentic and beautiful. 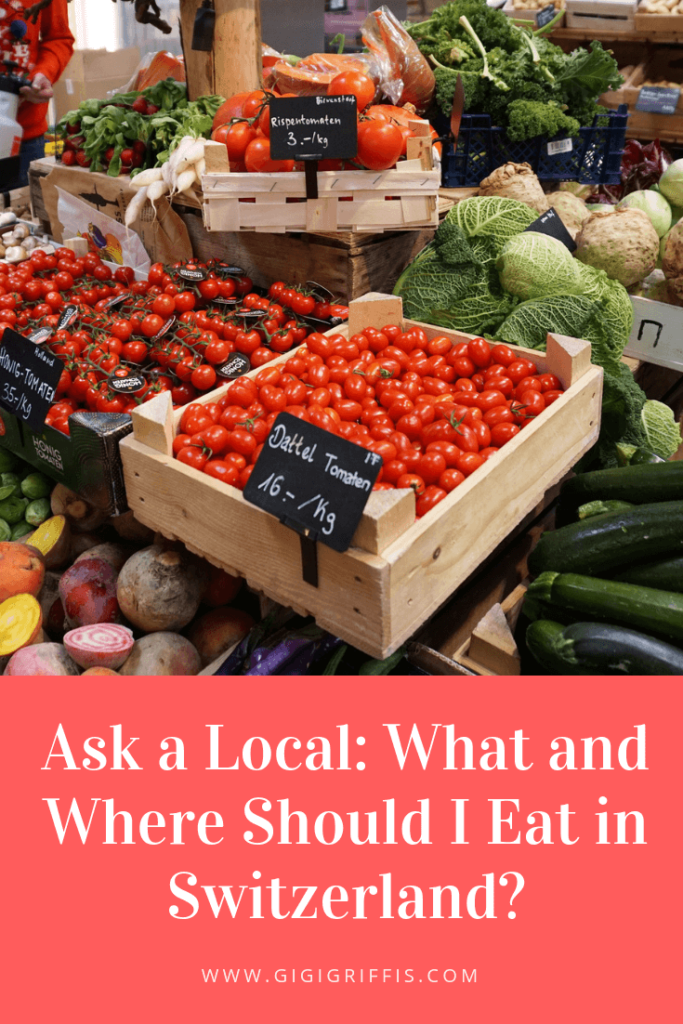 Ask a local: what should I do, see, and eat in Vittoria, Italy?

Ask A Local: What Should I Do/See/Eat in Interlaken, Switzerland?

What to Do, See, & Eat in Florence, Italy

Ask a local: what should I do, see, and eat in Palazzo D’Assisi, Italy?

Ask a local: what should I do, see, and eat in Trento, Italy?

Ask a Local: What Should I Do/See/Eat In Rome?