Popular posts
The cost of traveling Europe: real budget numbers from 9+ years of travel
A creepy Halloween cover reveal: The Wicked Unseen is here!
My secret news: I wrote a novel for Netflix!
The most (and least) dog-friendly countries in Europe
The most (and least) hiker-friendly countries in Europe
The ultimate guide to Europe’s digital nomad visas
How we define disability (and how maybe that needs to change)
How I make money while traveling the world full-time: behind the scenes with a...
So You Want to Freelance? Here’s How to Set Your Hourly Rates.
I Have OCD. This Is What It’s Like.
travel how-tos

The Digital Nomad’s Guide to Mostar, Bosnia and Herzegovina

A strange little fairytale town where a charmingly restored old town and beautiful nature landscape meet the sad scars of a war not so far in the past. On one block, tourists swoon over a tiny stone bridge. A few blocks later, an abandoned, bombed out school hosts a warning sign: do not enter.

A few blocks more and another abandoned building is now home to a thousand plants. Creeping vines and strangely large trees. A testament to just how long the scars of war stick around.

There are plenty of guides out there to Mostar. They tell you to go see the old bridge (which you should) and to wander the old town (which you also should). They mention the nearby waterfalls and the proximity to much-larger Sarajevo.

What I couldn’t find online was information about day-to-day life. About how to get to the fresh market or where to find the good hairdresser or what cultural differences to expect when coming from Western Europe.

To tell you all the things I wish I’d known before I arrived. 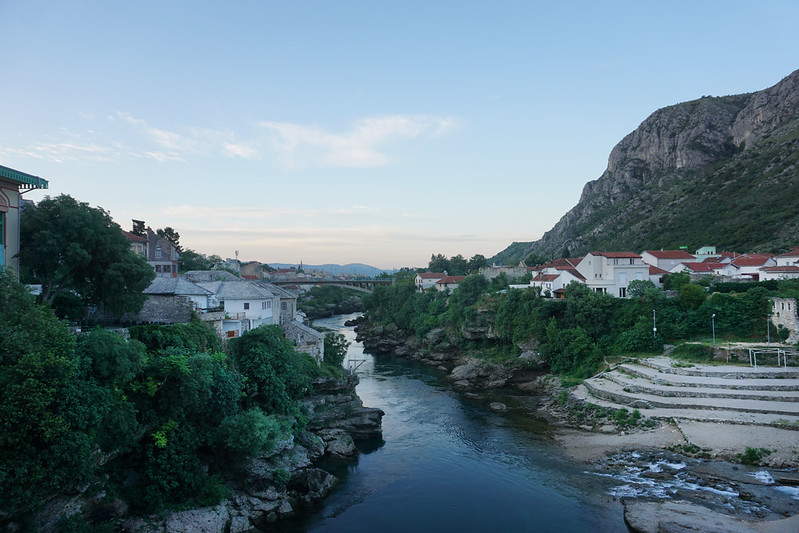 The first: the middle of the day is tourist time. At least this time of year. Tourists bus in from Sarajevo or Dubrovnik (or wherever) in the morning and bus out again in the afternoon. Before 10 a.m., the streets of old town are much quieter. Before 7 a.m. you’ll probably have them to yourself. And after about 5 p.m., they quiet again.

The second: there are no street signs here. When getting directions or writing them down, write down landmarks, not street names. In a whole month here, I’ve seen only a single street sign. That’s not exaggeration. I looked for them and found only one.

The third: for groceries, head to the massive, amazing fresh market out by Mepas Mall. It’s hard to find, but worth the detour. In May, expect sweet black cherries that pop in your mouth, gorgeous Dalmatian oranges, and piles of green onions. For whatever you can’t find there, Konzum is a good place to try. There’s a big one right next to the fresh market and a smaller (though still very much sufficient) one just outside old town right next to Hotel Kapetanovina. 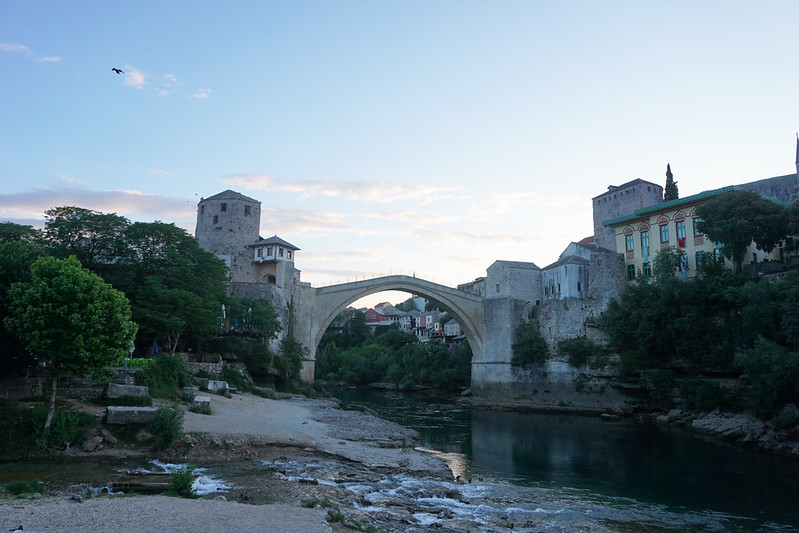 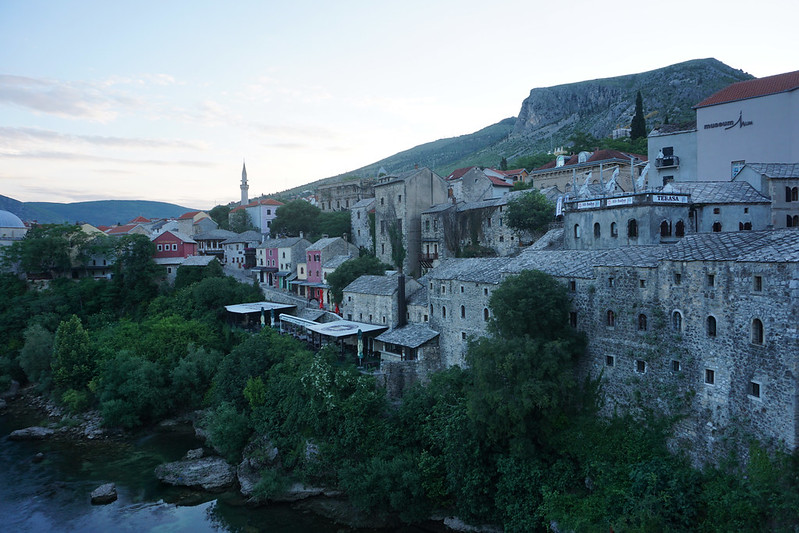 The fourth: the prayer calls are probably earlier (and louder) than you’re expecting if you’ve never been somewhere with them before. If you’re a light sleeper, finding an apartment farther from the mosques is your best bet for getting a good night’s rest. In May, the first call of the day has been somewhere around 5 a.m. The last call is around 10 p.m.

The fifth: movies are in English here with Bosnian subtitles. And they’re dirt cheap. If you need a rainy day activity, expect a ticket to cost about $3 at the cinema in the mall.

The sixth: when you cross the bridge, wear your sturdiest footwear. The bridge is incredibly slick.

The seventh: If you plan to pay by credit card, you need to tell the restaurant before they bring the check. There’s some sort of strange law here that restaurants can’t change payment type once they’ve entered it into the computer. If this does happen to you, keep in mind that the restaurants here usually accept Croatian kunas and Euros as well as Bosnian marks. 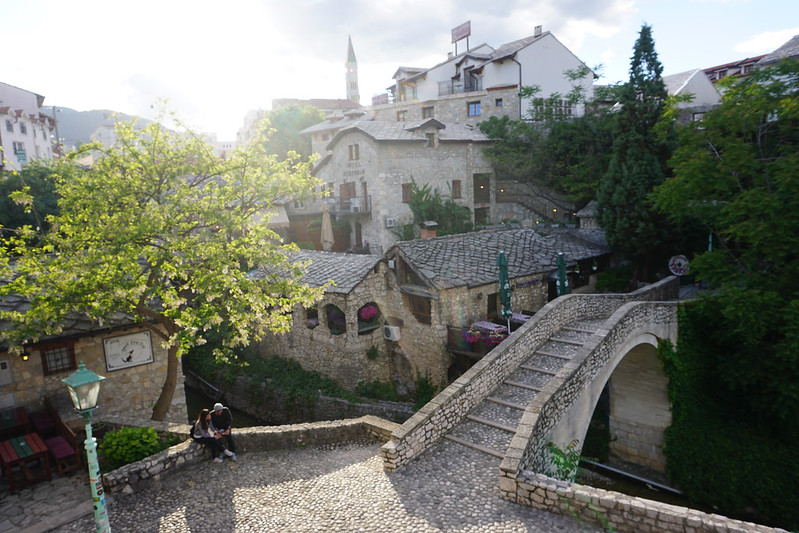 The eighth: Bring your own Benadryl. There is no equivalent here (or in nearby Croatia), so if you suffer from allergies or have a dog prone to breaking out in hives, you’ll probably want to have brought some from home.

The ninth: Spend more than one day. Most travelers pass through Mostar in a whirlwind rush. A single day is all they can spare for the little fairytale town. But slow down, there, friends. Mostar is worth an overnight at the very least.

Don’t just see it in the daytime surrounded by the tourist hordes. Stay the night. Stroll the old city in the early morning when the sky is faintly pink and the cobblestone streets are empty. Have dinner on the pretty iron-gated patio of Sadravan, then a drink on the hidden-away terrace overlooking the bridge at Urban Grill. Watch the sun set over the mountains. And wake yourself the next morning with a strong, smooth Turkish coffee.

You don’t need weeks upon weeks to see Mostar, but do give it at least an overnight. The morning and evening are Mostar at its best. It’d be a shame to miss them. 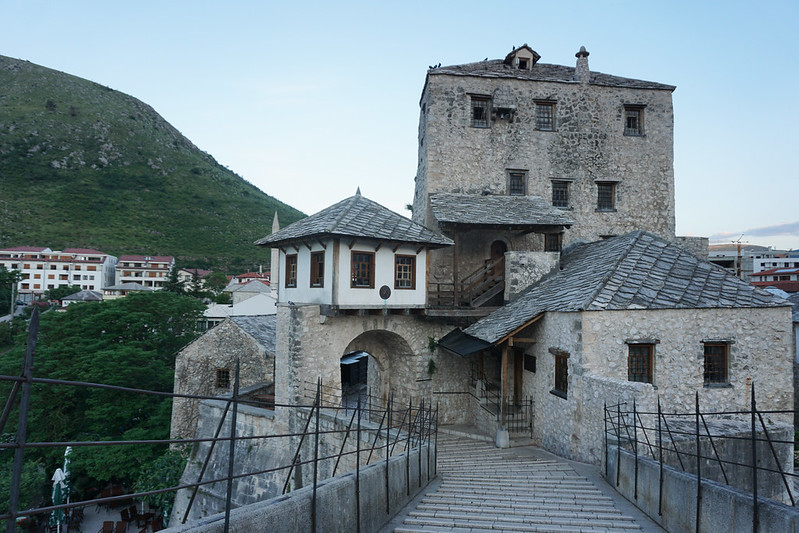 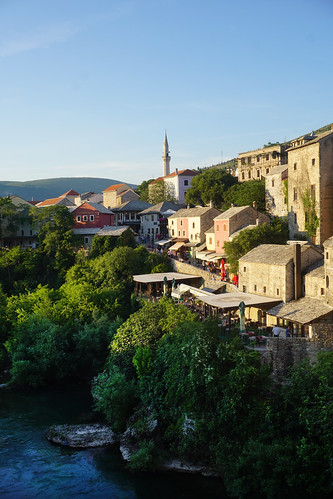 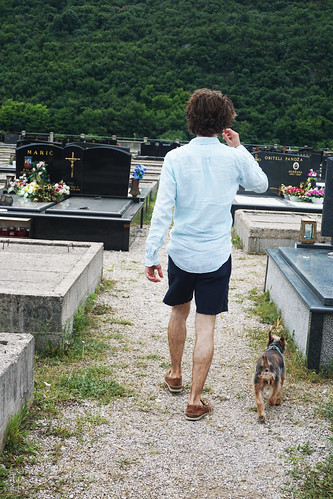 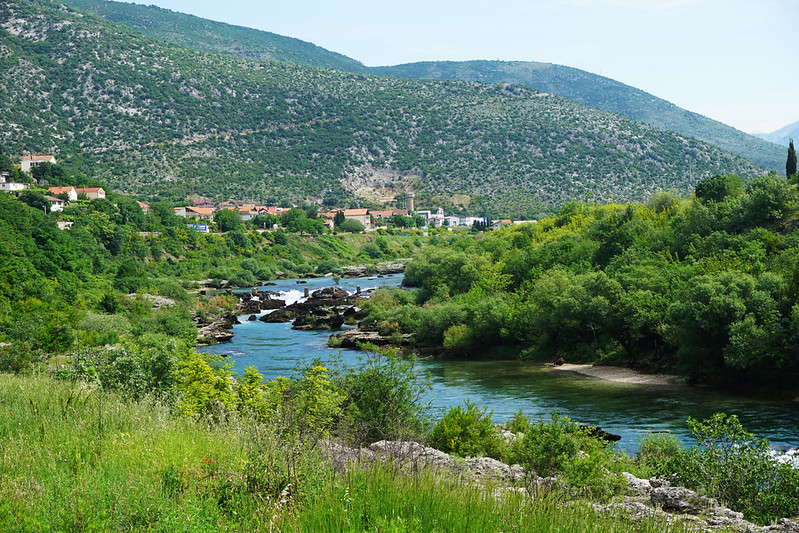 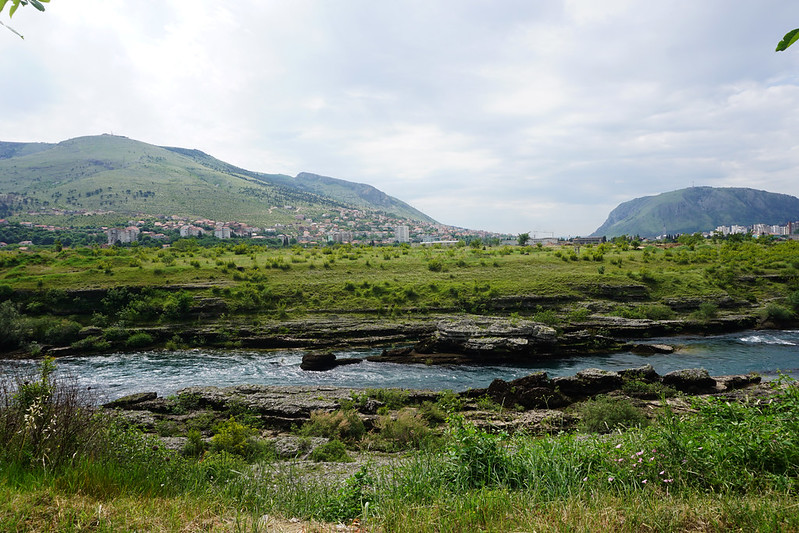 Have you stayed in Mostar? Any tips for those visiting or staying a bit longer?

Where to stay in Bad Ischl, Austria

Logistics, Baby: Road Tripping Across the Country with a Boyfriend, a Dog, & a...

Switzerland on a Budget: Local Tips for Traveling Cheaper

How to Walk the 88 Temples Pilgrimage in Japan

Hey Digital Nomad, What Travel Planning Tools Do You Use?

Hey Solo Traveler Girl, Don’t You Ever Get Lonely?

I’ve already looked up sunrise/sunset times/locations relative to Stari Most so I’ll be up before the crack of dawn to see it and snap some photos! It’s just 4 minutes from my lodgings, so that’ll be ideal. :)

Nicely put, Gigi. I loved Mostar and am sorry to have missed the big farmer’s market. Next time :)

Yes! Also, there’s a big one here in Konjic! But only on Fridays. If you ever pass back through, head down on a Friday and it’s like 20 times as massive as the little stand that’s there the rest of the week.

Hey Gigi. How did you find working online here? I’m in SE Asia at the moment but want to explore the lesser known countries at some point in the future.

I can’t imagine there was much of a community here (I might be wrong?) but were you able to work out of cafes with good wifi etc?

Actually, to my surprise, several other nomads passed through while we were there. We met up with a couple who were passing through on a day trip (while basing in Croatia), a coach who was basing in Mostar for three months of the summer while she had to be outside the schengen, and just missed another nomad who was coming down from Sarajevo. It’s an up-and-coming spot, I think.

As for work, I usually work out of my apartment wherever I am (occasionally I hit a cafe, but usually I’m more productive somewhere quiet), but I did hear that there’s a co-working space of sorts out at the university. Not sure if that’s true or what the quality level is, so you’d have to do some research, but could be interesting.

hmmm, that’s interesting! Thanks for the insight Gigi

I totally wish we’d had the time to spend a night there. It’s such a cute town but it’s overwhelming the number of tourists that turn up. I so would’ve loved to wander the streets after all the buses left. I guess I’ll just have to come back!

Any tips on the best way to get affordable internet and also affordable monthly accomodation? My partner and I are thinking about staying for a month or two, we also work online. So need an apartment to rent as opposed to a hotel/hostel as its too expensive for longer stays.

Thanks for sharing the great post, has further convinced me its where we should stop in next!

You can filter Airbnb (and probably other apartment rental sites) by Wi-Fi. We always contact the owner ahead of time and ask them to do a speed test and send us the results. We found that apartments there were super affordable. If you look at other Bosnia content here on the blog you’ll find a post on where we stayed in Bosnia (with our apartment in Mostar as well as some other places we stayed). It was really nice and the Wi-Fi was fast when we were there. The only downside was being very close to the mosque speakers (so very loud prayer calls that jolted us awake super early), so if you stay there I recommend earplugs.

Thank you Gigi! I will take a look :)