February newsletter: Georgia and other disasters

You know what they say about the best made plans, friends…

As you may already know, this February, I decided to take on a foodie challenge every month for the rest of the year (except September because vacation). The idea was to shake things up, challenge myself to try new things in the kitchen, learn new food-related skills, get outside my food comfort zone. And the first challenge, since Chad and I were spending half of February in the Republic of Georgia, was to try 10 of the country’s most famous dishes.

And so I arrived and hit the ground running. Where could we find some local dumplings? Where was the best restaurant to try that bean dish I’d been hearing about? I had a list of restaurants that had been recommended highly from a variety of sources and I picked one that had gotten rave reviews for its traditional cuisine.

We arrived in the rain and jumped out of the cab, looking frantically around for a sign. And…nothing. The restaurant wasn’t there. It wasn’t up the block or down the block or on the next street over. It must have moved or closed and its listing never updated. Bummed, we settled for a nearby wine bar that was supposed to have great local cheese. And again, no such luck. The food at the wine bar was fine, but not local.

It was still early in our visit, so I resolved to try again the next day.

And that’s when the bomb dropped.

A few hours later, I found out I urgently needed a root canal.

Now, if you’ve ever had a root canal, you know they hurt. like. a. bitch. And I don’t mean during the procedure. During the procedure, the dentist was deft with her needles full of numbing agent and all was well. But then day two came, and day three, and day four. And I found that the only thing I could eat without crying was non-solid foods.

A week into our stay in Georgia and all I could eat was pudding and soup. If I accidentally bit down, the pain reverberated like an echo in a canyon. Boom, boom, boom, boom. Never-ending.

By this time, we’d decided Tbilisi wasn’t really our jam. So we’d purchased one-way tickets to Austria and train tickets from there into Croatia where we plan to ride out the rest of winter.

Of course, all this meant that my foodie challenge wasn’t going to come close to 10 dishes.

In those last few days, as my face attempted to heal, I did my best to get a few in, but, ultimately, it wasn’t to be. Which is okay. Because here’s the thing about setting any sort of challenge or goal for yourself: it isn’t always a guaranteed win. And that’s okay. The idea here isn’t to always win. The idea is to always try. To push myself. To encourage myself. To try new things even if they end up failing or sucking or otherwise not working out.

So, onward and upward, right? 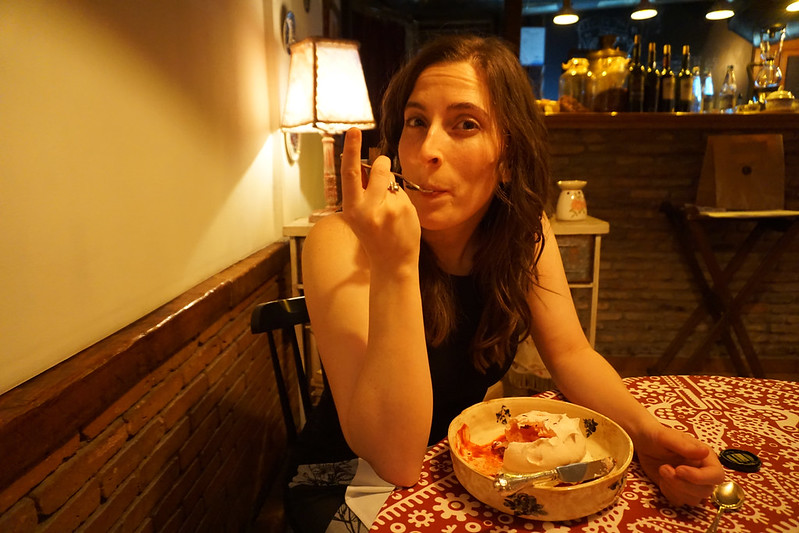 ^^^ Me attempting not to bite down too hard.

Which brings us to March. This month, my foodie goal is simple: learn to take better food photos. Because the truth is that my food photography can be a little hit or miss. I studied photography a bit in college and I use those skills constantly for both fun and work. I think I’m good at framing photos and knowing what will make a good shot.

But there are so many things I could improve. I could get to know my camera better and stop relying so often on automatic settings. I could learn tricks to deal with low light (my dinner photos come out so much less epic than my lunch ones). I could get over my discomfort at asking dining companions to hold on just one second! while I take photos of their food.

And so that’s March. I’ll be reading, YouTubing, and learning everything I can about how to improve my food photography.

If you’d like to join me, I’d love to have you along for the journey! Let me know what you learn along the way. 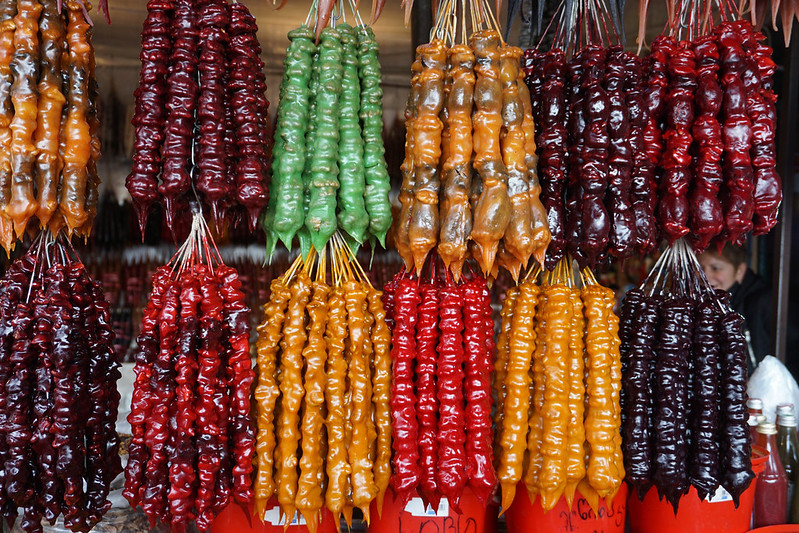 Churchkhela, a Georgian dessert made from nuts covered in sticky evaporated grape juice.

February on the blog

In between dental dramas, I spent this month on the blog sharing Switzerland’s top chef’s favorite dishes and restaurants. I also featured a big farmers market in Bern and an interview with a Master of Cheese (coolest job title ever).

I also wrote a lot about Brittany, France. I started with a big Brittany food guide, moved on to answer the question “what is fleur de sel?” (hint: the most expensive sea salt in the world), and then circled around to talk about the second largest farmers market in France. On the review side of things, I talked about a very good bakery in Rennes and, just outside Brittany in the Loire Valley, a B&B breakfast featuring products made by monks and nuns.

Elsewhere in France, I shared two of my favorite farmers markets in Annecy and Grenoble.

Finally, I wouldn’t be doing Europe justice if I didn’t talk about Slovenia’s amazing farmers market.

How was your month?

Did you join my Georgia challenge and have a meal in a Georgian restaurant or try to make a Georgian recipe at home? I’d love to hear about it. You can reply to this email or drop a comment on the blog anytime.

By the time you read this, we’ll be settled in Split, Croatia. If you have any favorite foodie experiences, restaurants, or ingredients from the town or region, please let me know!

Want to get the newsletter in real time? I send it at the end of each month and you can sign up here. Plus, you’ll get a copy of What to Order in Europe – a little guide I put together just for subscribers.

Where to find pine-needle cheese (May newsletter)