As you may already know, this September I took a month off to cycle across France, from border to sea. Since then, I’ve been sharing practical information about how I did it, including my budget, how I trained my dog, and where we stayed along the way.

Today, that practicality continues with a discussion of my bicycle, setup, and gear.

My bike was a vintage Swiss military bicycle, restored with 12 gears. 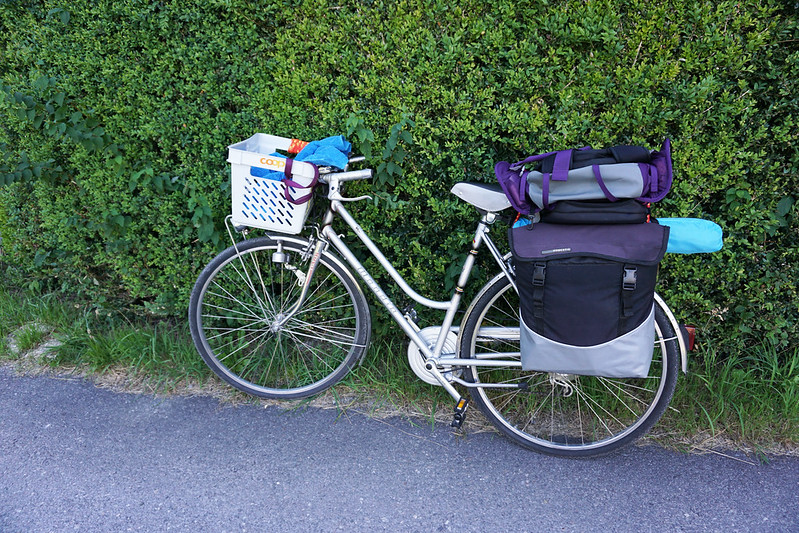 Now, this is actually not a great distance cycling bike. It’s a bit heavy and it’s not built for speed. Still, I fell in love with it when I saw it and while I was slower than anyone else doing the distance path, I did make it the entire distance.

Once I had the bike, which came with front and back racks, I outfitted it for travel. On the front, I attached an old grocery basket with zip ties. In went a towel and this is where Luna rode out the long cycling days. On the back rack, I attached a pair of large second-hand panniers. These are where I stored pretty much all of my things during cycling. On top, I attached Luna’s Sleepypod Air carrier* (folded flat), a small tent, and my backpack (also flattened) with a pair of bungee cords. I carried a small backpack on my back with just the few items I needed most often (things like my camera). 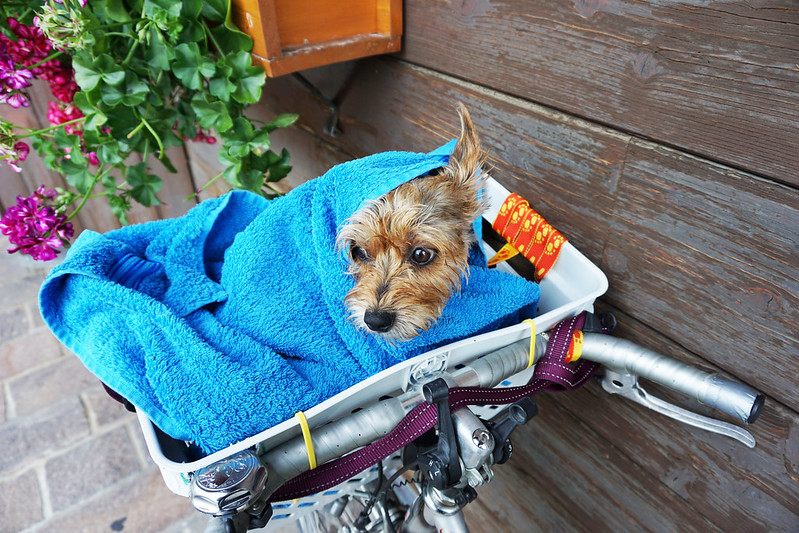 In addition to the usual above items, I also carried:
A small tent (like this)
A small flashlight (like this)
Baby wipes (good for so many things…cleaning a spill, washing hands for a meal, use as toilet paper when using the wilderness bathroom)
A water bottle
A bike lock
A sleeping bag
A towel (which doubled as Luna’s seat cover and a picnic blanket)
Some small ropes
A poncho
Trash bags (which I used to cover my gear on the back of the bike when it rained)
Many ziplock and other baggies in a variety of sizes (which I stored all my things in within the panniers in case rain did get into the panniers at some point)
Helmet
Cycling gloves (like these)
Maps 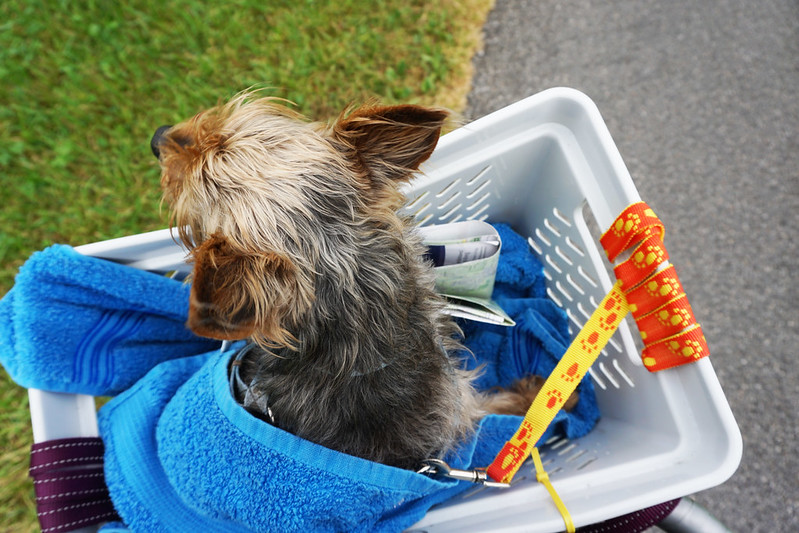 Out of all that, there were a few things I discarded along the way or wished I hadn’t brought. First, the tent, because I realized that for me cycling and sleeping on the ground don’t mix. Then, the ropes (which I never used) and the water bottle (which was crappy quality and I replaced after the first week). I did keep my sleeping bag till the very end, though I only used it a handful of times. And I probably could have also done without the headband.

I also wish I’d had a different set of maps. The ones I bought were seriously out-of-date and caused me quite a few problems along the way (like the day that I walked my bike five kilometers past the bike shop because it was mislabeled).

Other than that, the gear all worked out pretty well. If I had it to do over, the only two things I would have added would be actual cycling shorts (to prevent chafing) and diaper rash cream (the secret remedy to chafing if it occurs).

* Thank you to Sleepypod for sending Luna a free Air carrier in exchange for a review. We loved our last one, which lasted over three years and we only replaced because she eventually managed to make a couple tears inside the lining, and were so happy to get a new one. As always, opinions and adoration are my own.

Where to stay in the Latvian countryside (& Parnu, Estonia)

Beautiful Spaces: Where We Stayed in Pittsburgh, Pennsylvania

Beautiful Spaces: Where I Stayed in Zurich, Switzerland

Week Five: How to Set Up Your WordPress Site

Beautiful Spaces: Where We Stayed in Hershey, Pennsylvania

Beautiful Spaces: Where I Stayed in Interlaken, Switzerland (Goats Included)

There are also creams you can use to avoid chaving, like Chamois Butt’r, etc. They help a lot! :-)