This is why I hate food blogs.

Because every time I research a new destination, every time I sweep into town and drag my poor less-particular friends to the “best” cafe/restaurant/cafeteria in town, every time I let my excitement about a new experience run away with me, I end up in some awful tourist trap that some blogger passing through town for a day and a half figured was good enough to throw on their “best places to eat” list.

Note to bloggers: It’s okay to say you didn’t have any rave-worthy food experiences in a place. It’s not okay to send the rest of us to spend our hard-earned money to eat sugar-flavored cardboard masquerading as a special, local treat.

(And yes, I get that irony that I, too, am a blogger. If I ever send you to a garbage place like this, feel free to call me the fuck out.)

So, what is the delightful place that wrecked my afternoon dreams on my first weekend in Riga?

When I first arrived, I was suitably excited. Authentic local desserts? Hot chocolate with a hint of local liquor? An interior with taper candles and hidden rooms? Sign me up!

The interior was intriguing. Medieval-style, with a cave-like feel and shabby, gothic furnishings that gave me Dracula vibes. Riga’s signature liquor bottles were lined up on shelves, shiny and dark. Chocolates lined a glass case.

The bloggers had raved about the Black Balsam hot chocolate (hot chocolate with a shot of local liquor) and the chocolate cakes, so that’s what I ordered. Since the cake menu was longer than expected, I even pulled the server, clad in a Medieval-style dress, in to confer. “Which one is the one you’re known for? Which one is representative of Riga, in your mind?”

She pointed to the chocolate cake with berry preserves and a crunchy chocolate shell. “This is our specialty.”

Sold, I thought. And leaned back to await Riga’s best dessert.

To which I now say ahahahaha. What the fuck.

Of course, the moment we sipped those tall glasses of so-called hot chocolate, canned whipped cream was the least of our worries. Bitter and thin, it was as if someone had halfheartedly dropped a pinch of cocoa powder into a glass of hot water and then spit some flavorless liquor in for good measure at the end.

I made it all of two sips in before giving up on the “famed” Black Balsam hot chocolate.

And if you think that’s the end of it, you’d be wrong. Next came Ali’s plate of chocolate truffles (which distinctly did not match what she’d ordered, though they tried to charge us extra to bring her what she did order) and my so-called cake.

The first tip-off on the cake was the too-perfect circles on the chocolate top. Too perfectly circular to be hand-drizzled. The first bite confirmed it. Sickly sweet, industrial jam layered over a crumb that made me think of packed in, sugared sawdust or shredded cardboard.

This was industrially made cake and who the fuck thought this was some special authentic local thing? I hope those bloggers felt me side-eyeing them from a thousand miles away.

I made it a few bites in (would the second bite be better? The third? No and no.) before leaning back in my chair and watching several massive groups of tourists (cruise ship shore excursions?) file in, ooh and ahh over the hidden doorway that would be cool in a place that didn’t serve a pack of lies.

If you see someone recommending the Black Magic Cafe, assume they’re also fans of lies, eating cardboard, and being overcharged and move right along. Riga has much better places to eat cake. Unless you’re a masochist. In which case, enjoy your torture. 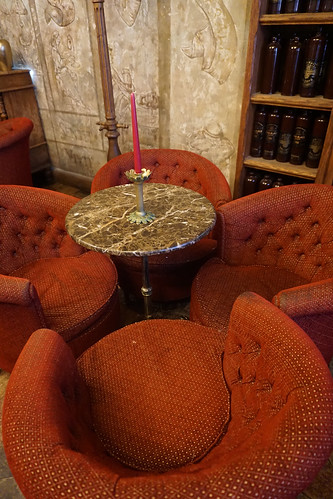 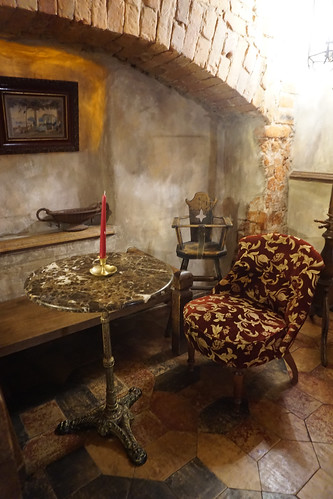 The travelers’ guide to French cheese