How Much Does It Cost to Spend a Month in New York City?

As you may already know, Chad, Luna, and I are currently holed up in New York City for a few months, networking, writing, finding new clients, and taking advantage of all the city has to offer.

New York is generally thought of as an expensive place to live. But here’s something interesting: when we were price comparing our options for large US cities with tech networking opportunities, NYC was the cheapest of the bunch.

Cheaper than San Francisco (though that’s no surprise). Cheaper than Seattle, where we’d either need to pay a premium for housing or deal with all the expenses (and hassle) of a car.

Still, the US tends to run a lot more expensive than Europe. So, as usual, I tracked my budget meticulously. But this time not just because I want to show how affordable full-time travel can be, but because I need to be more careful here if I want to stay within a reasonable budget.

As usual, here are some of those numbers, shared with you as part of my ongoing attempt to demystify the costs of full-time travel. This budget is from the month of March in 2018.

First, a few important notes. Don’t forget that I’m working while I’m traveling (which means I’m not out exploring as much as someone on vacation), that I fall somewhere in the middle of the budget-travel and luxury-travel crowds (so you can travel cheaper or more expensively than I do), and that the below costs are my own, even though I travel with a partner (for info on how we split expenses, see below).

Now, to the actual details of this stay:

Normally, we find our apartments on Airbnb. But Airbnb prices in many US cities have gotten ridiculous. ($1,200 a month for a room with no kitchen or living room access in Denver when you could rent a whole apartment for less than $1,000? No thanks. $2,000 for a room in Brooklyn when that same room on Craigslist is $1,300? Hard pass.)

Since our go-to rental option is unsustainable here, we turned our attention to Facebook groups, The Listings Project, and Craigslist. We eventually (after many extremely painful weeks of searching and frequently being denied for being a couple and/or for having Luna) found our roommate via one of the Facebook apartment/roommate groups.

Our place is in Harlem, in a neighborhood full of families and young professionals, a couple blocks from two different subway lines into the city. To get to midtown, it takes about 20 – 30 minutes. We share the apartment with a super nice roommate who’s never home and a hilarious cat who’s desperately in love with Chad. The total rent for a couple came out to $1,300 per month, and since I’m paying the majority of our rent while Chad starts his business, my share of that is $1,100. 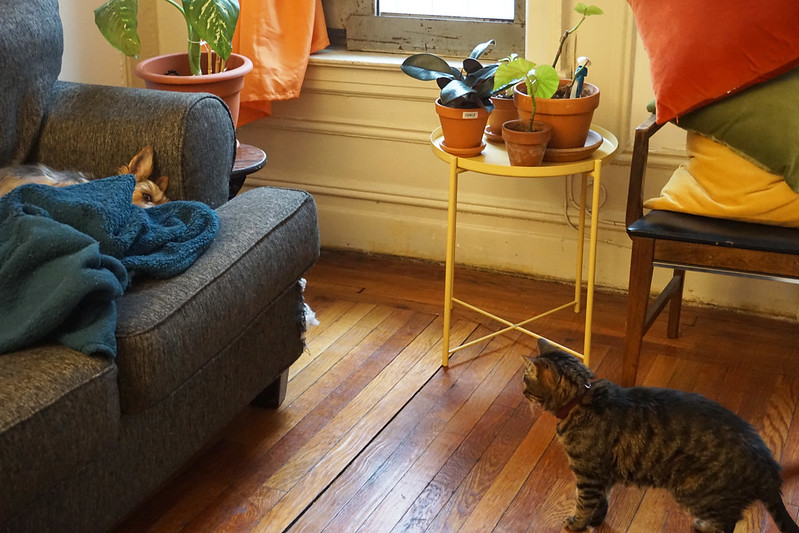 Local transportation is the cost of an unlimited subway pass, a necessity when you’re this far north of all the city amenities.

Groceries here run pretty pricey. This month, we ate out a bit more than usual, but also spent a pretty penny on eating in. I didn’t do much fancy cooking because I’m out networking so often, so our meals were mostly simple stir fries, soups (chicken tortilla, hearty chicken and veggie), burrito bowls, or pasta with homemade sauce.

As for eating out, I don’t know about Chad since we were often out at different times, but I ate out much more than usual this month. This is because I was excited about finding some new favorite NYC restos (though, sadly, I’ve had bad food luck this month, so no new favorites to add to my list) and because I’m just out more during mealtimes.

As you can see, Luna’s cost of living was painfully high this month. Because, dear god, NYC vets are expensive. Two shots and a few minutes with the vet for several hundred dollars, which makes me desperately miss Slovenia (where major tests cost like $50). Other than vet visits, this number also includes some of her food (though not all, as that sometimes gets mixed up in my own grocery bills).

As for health and wellness, it’s super low for the US. This is only because I couldn’t find nationwide health coverage via the ACA (all the plans available in the areas I searched were state-coverage-only, which obviously doesn’t work when you’re traveling full-time and not sure where you’ll be during your stay). So I’ve got emergency travel insurance, but that’s it. Luckily, I didn’t have to go to the doctor in March. This category is just insurance and some pharmacy purchases.

Looking for more info on financials on the road? Here’s a much more detailed piece on the topic.

How Much Does It Cost to Spend a Long Weekend In Italy? (Emilia Romagna)

How much does it cost to spend a month in Bad Ischl, Austria?

How Much My Digital Nomad Lifestyle Costs: Real Budget Numbers from Nearly 7 Years...

How Much Does It Cost to Spend Two Weeks in Ljubljana, Slovenia?

How much does it cost to spend a month in Riga, Latvia?

Traveling is Not as Expensive as You Think

Who knew New York could be so affordable? That’s awesome! And thank you for sharing how you found your apartment. I always wonder how people find affordable short term rentals.

OMG I didn’t realize your roommate has a cat! I’m sure it’s just the angle of that photo, but Luna totally looks like she’s trying to hide from the cat behind that blanket. Do they get along?

Haha, yeah. They avoided each other like the plague for about a week and now they still give each other space mostly (except that one time that the touched noses, so cute), but they mostly just hang out in the same room and pretend the other isn’t there.