Belgium: 5 Things You Should Know About the Gentse Feesten

Let’s take a break from my sad London stories, shall we? Now that it is officially spring, I’m guessing you’re starting to make some summertime plans. And just in case you’re thinking FREE and FESTIVAL, here’s a post I originally wrote for Matador Network about Belgium’s Ghentse Feesten.

The Gentse Feesten—a 10-day food, art, music, and drink-fest in Flanders that draws young tourists from all over the world—just so happened to fall smack dab in the middle of my recent visit to Belgium. And if you haven’t ever been to this festival, you should probably think about going. I mean, what’s not to love about free music and free art and free dance lessons and free urinals on the street (as seen above)?

That said, you should also know a few things before you plan your 2013 jaunt to the artsy, wild city of Ghent. Things like…

1. You might get peed on.
Right before the festival, I noticed a sudden influx of public, plastic urinals and no peeing signs on the streets. Apparently, when toilets are scarce and/or not free, both guys and girls whip it out/pop a squat all over the city center. The nice folks who run the festival have tried to discourage this by providing large plastic urinals throughout the city and posting threatening no-peeing signs all over the place. 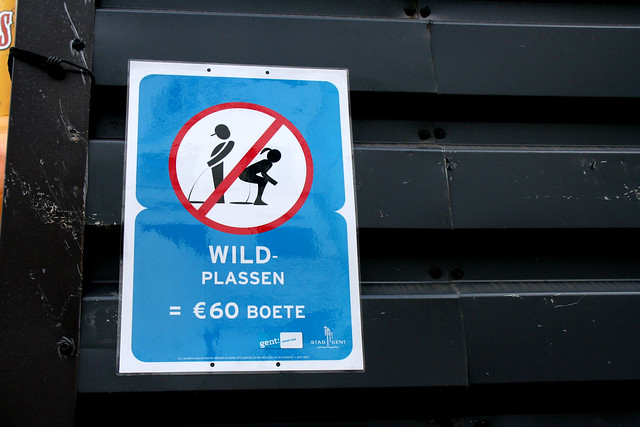 Unfortunately, drunk people are seldom deterred by signs, or urinals for that matter, and I still barely managed to avoid being peed on by a drunk, flailing man who was laughing uncontrollably while trying to pee into a sewer drain. Fail.

2. The street is not only a toilet, but also, apparently, one giant bed.
Music, dancing, eating, drinking – all go on into the early hours of the morning during the festival (so, pro tip: if you want to get some real shut-eye, book a place outside the city center), and then all the drunk people just collapse into heaps on the street. If you wake up early and head to the city center, you can see the street cleaners trying to wend their way through the unconscious festival revelers. They don’t even roll over.

Now, that is festival commitment, people.

3. Covered patios won’t save you from the rain.
It’s no secret that Belgium’s a rainy place. And you’re likely to run into at least a few showers during the festival revelries. The good news is there are plenty of cafes, restaurants, covered patios, and covered venues to duck into if things get too wet. The bad news is a well-intentioned waiter who is trying to drain the rainwater off the patio covering might just dump it on your head. (And then snarky American writers will think it’s funny and write about your misfortunes.)

4. If you flirt with the guys running the Moroccan restaurant tent, they will offer you free hot tea (and then promptly spill it on themselves).
Just in case you were wondering if flirting works the same everywhere: it does and it is awesome.

5. The last day of the festival is known as “the day of empty wallets.”
The festival itself might be free, but do come prepared to spend some money. After all, what’s a vacation without a few beers (and, if you’re me, fries, waffles, mussels, champagne, and chocolates)?

Seriously, though. Despite the getting-peed-on risks and the possibility of tripping over people in the mornings and the whole being-drenched-by-well-intentioned-waiters thing, the Gentse Feesten is most definitely worth a visit – particularly if you like 10-day-long, never-ending parties that are, in case you didn’t catch it above, free. Not only did I see free live music, dance lessons, and street art, but there was also a guy with a sign offering free hugs. And he was only a little creepy.

So come to the Gentse Feesten, get yourself a free hug, pee in a very public urinal, and dance till you drop (at which time the street sweepers will clean around your exhausted body).

Interested? Here’s the deets: the Gentse Feesten is held for 10 days each year starting on the Saturday before July 21. You don’t need tickets and you can find lists of all the artists and acts on their website a month or two before the event. If you don’t want to sleep on the street, you should book your hotel/hostel/couch in advance, as everything from apartments to couchsurfing hosts fills up quickly. While you’re there, drop by Swing Cite for a free dance lesson, always carry cash for the fabulous flea markets, and feel free to eat your body weight in waffles and French fries (if only to make me feel better about the fact that I did).

A revised version of this article was originally published at Matador.

Because Everywhere Else Just Sucks

It was pretty excellent.

I’m sure you hear this all the time, but…. I aspire to your greatness. I travel a couple times a year and I doubt I would ever leave my job to travel full time, but I have a great time living vicariously through you.
Thank you!

[…] a ‘strop’ around their neck because they protested about paying taxes. Every year during the Ghentse Feesten a lot of us still wear the strop in […]