I read a lot. Always have. Probably always will. And every year, I track my reading. Usually in a word document, color-coded, organized by month, with random notes and emojis.

Normally, I only share my favorite books with you. But this year I decided to do something different. This year I’m listing them all. Because my favorites may not be your favorites. And perhaps you’ll discover something I liked and you’ll love through me making a more comprehensive list.

So, without further ado, a full list of the books I read in the second half of 2020 and a discussion of some of my favorites below (with the format stolen from the lovely Free Candie blog).

(Please note that links below are affiliate links, which means if you click through and purchase something, I get a small commission at no extra cost to you.)

(Books marked with an * were written by a writer from a marginalized group. By supporting these authors, you’re telling publishers we want more books from underrepresented authors.)

I also read a bunch of unpublished manuscripts and DNFed (Did Not Finish) 72+ books, of which I read anywhere from one chapter to one third of the book before putting it down (for a wide variety of reasons). I’ve included some interesting history books above, but I also read, skimmed, or spot-read some heftier history texts for research. (I generally only include commercial history books in my actual for-fun reading lists).

Best new book you read (not including re-reads):

In fiction, I think The War Widow by Tara Moss and She’s Too Pretty to Burn by Wendy Heard were my favorites. The War Widow – a hard-boiled detective story set in Australia just after WWII with a badass female detective at its center – was a special kind of delight because I’ve never seen a woman in that role in fiction. And She’s Too Pretty to Burn – which follows two teen girls as they fall in love and get wrapped up in (and can’t get out of) criminal activity with their closest friends – is one of the scariest YA thrillers I’ve ever read.

In non-fiction, Educated: A Memoir struck a chord with me. It’s the story of a girl homeschooled and abused who painstakingly teaches herself things like math in order to get into college and out of her terrifying home.

Book you were excited about and thought you were going to love more but didn’t?

Good Morning, Monster. I love the premise (who doesn’t want to be a fly on the wall of someone else’s therapy?), but I was disappointed to find a number of micro-aggressions and some other problematic content sprinkled throughout. For example: the author misgenders a trans woman several times before switching to her preferred pronouns after discussing her transition.

Most surprising (in a good or bad way) book you read?

Neon Girls! It’s a memoir about strippers who formed the first stripper union in the US and it was a fascination and delight. I know little to nothing about the sex work industry, so I was surprised at every turn.

Tara Moss. I’ve added the rest of her catalogue to my reading list. Not only was The War Widow a fun read, but I love that she’s a former model-turned-disability-activist using her platform for good in the world.

Best book from a genre you don’t typically read?

In general, I stuck with my genre wheelhouse in the second half of the year. My only real departures were The Haunting of Hill House (I am a chicken who can only handle very light horror) and a YA contemporary novel in verse called Long Way Down. Of the two, I think I enjoyed the latter most, but would happily recommend either.

Most action-packed/thrilling/unputdownable book of the year?

She’s Too Pretty to Burn – I felt literally breathless and had to occasionally put it down and walk around the house just to breathe. I was so terrified for every character in that book and felt in my bones that the author wasn’t going to spare them.

Which book would you be most likely to re-read?

Probably Secondhand Time – a collection of interviews with people who lived through the fall of the Soviet Union. It was intense and made me, by turns, furious and heartbroken, but I could see re-reading it for research again if I choose to do another writing project set in the former USSR.

Can a memoirist be the most memorable character? Because the women of Educated: A Memoir and The Lady’s Handbook for Her Mysterious Illness will stick with me for a long time.

Foul is Fair. The story is about a teen girl taking revenge on the boy who raped her and his friends who helped, but it reads like a fever dream, with even the blood and rage poetic. I listened to this one on audiobook and it has an unflagging cadence.

Which book was most fun to read/put a smile on your face?

Wild Life – a memoir about a girl who grew up half in a wildlife camp in Botswana, Africa, and half in the US. It was probably some of the lightest reading fare on the rather dark reading list above.

Books you’re most excited to read next year?

In 2021, I’m looking forward to re-reading Bad Witch Burning – an incredible YA novel about a Black teen who learns that she can raise the dead and decides to turn her powers into a get rich quick scheme. It is one of my all-time favorite books, and I was lucky enough to read it in manuscript form. So so SO excited for it to be a real book that I can recommend to everyone I know.

Also: When No One Is Watching – a thriller described as Rear Window meets Get Out – is at the top of my library queue (with like 50 people on the waiting list ahead of me, so I expect I’ll get to read it next year).

And I really need to get around to reading Code Name Verity and Pope Joan – two historical fiction books with rave reviews.

My goal to read more books by marginalized authors

This year, I also challenged myself to read at least one book per month by an author of color, one book per month by a queer author, and one book per month by a disabled/mentally ill/chronically ill author. There are a number of reasons I made this specific goal, including the fact that publishing tends to give marginalized authors less marketing support and less PR coverage, which means if you aren’t seeking these books out, you might simply not hear of them, even though they’re great.

So, how did I do with that goal? Counting unpublished manuscripts (which I read for my writing pals whenever I can) and history texts not listed above, I’m happy to say I went a little over my goal, reading 16 books by disabled, mentally ill, or chronically ill authors, 15 by authors of color, and 14 by queer authors. (The caveat being that there are the identities I know of and some authors may simply not be sharing their disability status, queerness, etc.)

I’ll be undertaking the same challenge next year and I hope you’ll join me, especially if you’ve never challenged yourself in this way before.

My reading habits, broken down:

Because I’m a big ol’ nerd, I also made some charts. Here’s the breakdown of what I read this year, genre-wise: 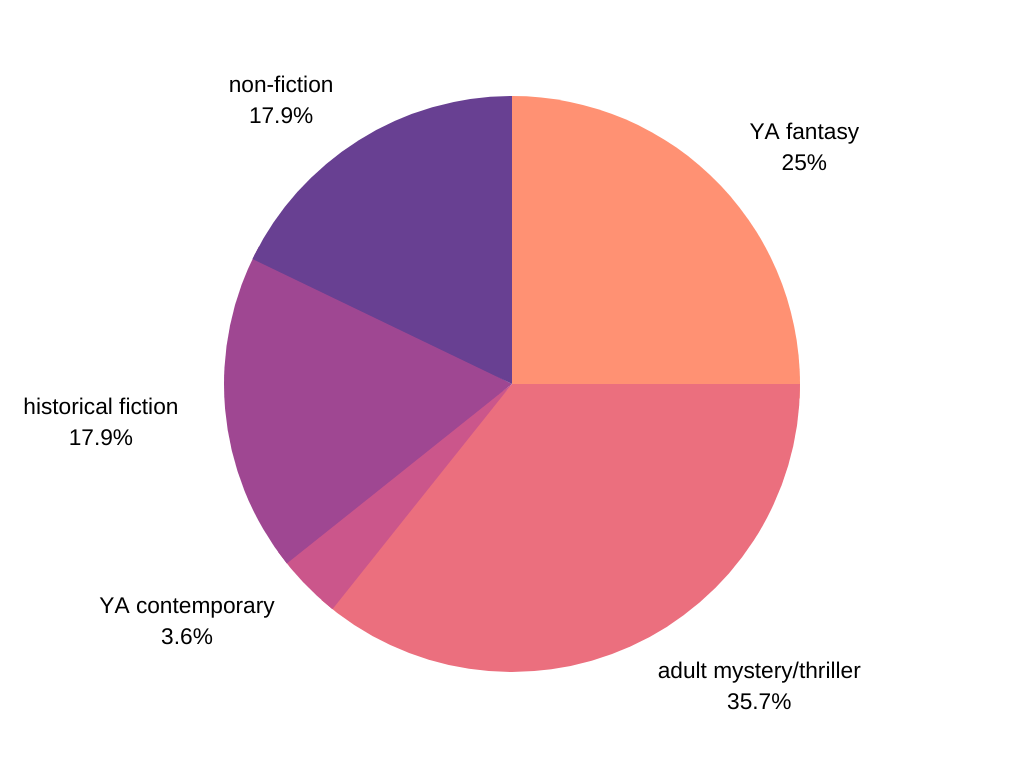 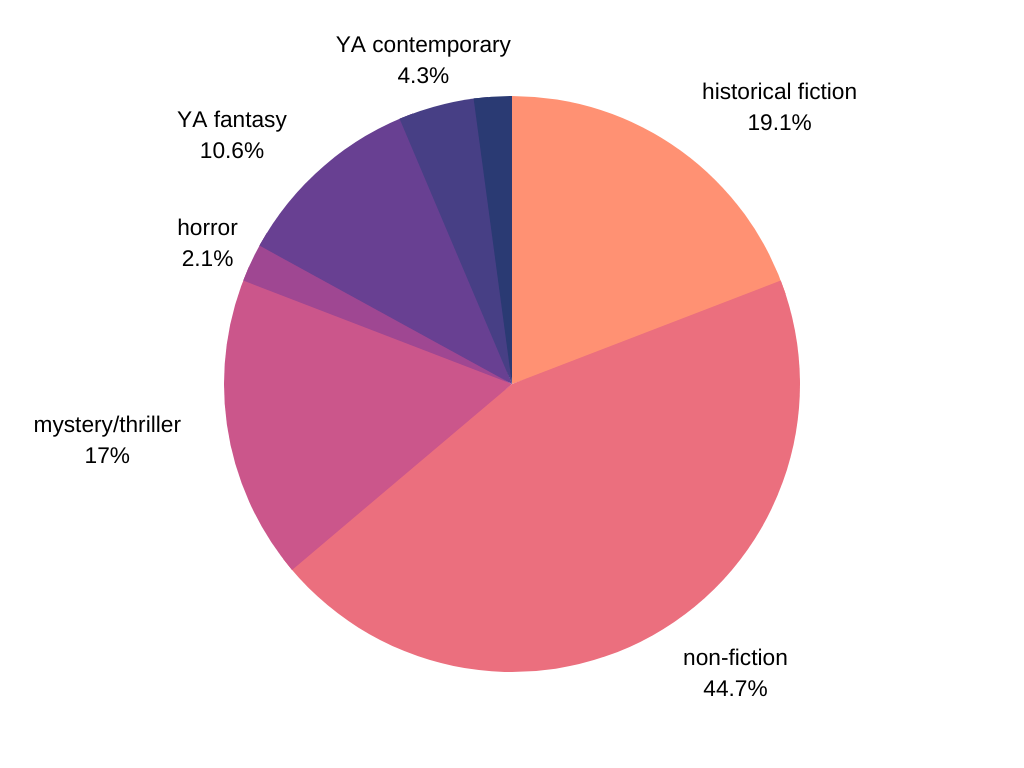 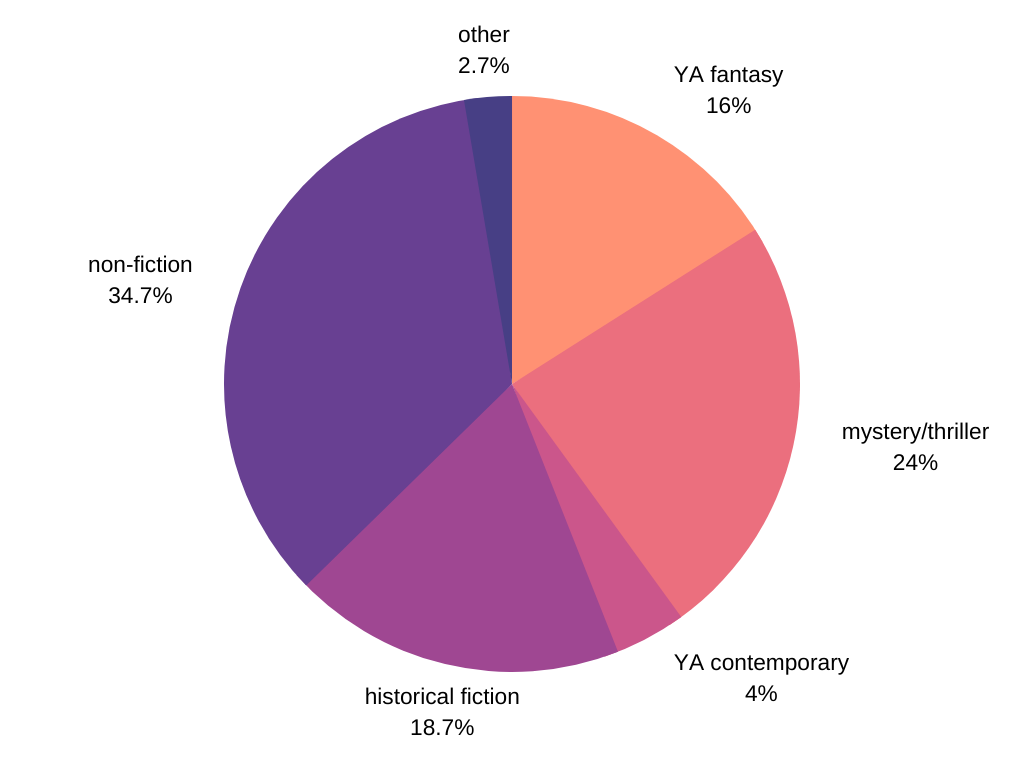 As you can see above, January – June, I hung out mostly in the adult mystery/thriller category. And the second half of the year, I spent nearly half my reading time on non-fiction (mostly because I like listening to non-fiction on audiobook and I listened to a lot of audiobooks in the fall). Overall this year, my most-read category is non-fiction followed by mystery/thriller, historical fiction, and YA fantasy.

What have been your favorite reads so far this year?

Beautiful Spaces: Where I Stayed in Sevilla, Spain

Where to Stay in Vienna, Austria (A Review)

Win a copy of my favorite book!

Need more history in your life? Here you go.