Popular posts
A creepy Halloween cover reveal: The Wicked Unseen is here!
My secret news: I wrote a novel for Netflix!
The most (and least) dog-friendly countries in Europe
The most (and least) hiker-friendly countries in Europe
The ultimate guide to Europe’s digital nomad visas
The cost of traveling Europe: real budget numbers from 9+ years of travel
How we define disability (and how maybe that needs to change)
How I make money while traveling the world full-time: behind the scenes with a...
So You Want to Freelance? Here’s How to Set Your Hourly Rates.
I Have OCD. This Is What It’s Like.
my location-independent career

Welcome back to my blogging experiment.

As you may already know, in January, I started a brand new blog with the goal of seeing if I can make money through blogging within a year. Every month, I share some details as I work (in my spare time) to see if I can grow said blog to a point where it starts earning some money.

September has now come and gone, so here’s the skinny on the final month of Q3:

My domain authority (a score that tells you how likely you are to rank in Google) took a tiny step backward this month, from 23 to 22.

Even though I track this number, seeing it tip-toe backward doesn’t bother me for a few reasons. One being that it’s just a metric meant to help you assess how well you’re doing with search engines – but it’s not the search engines themselves. I’ll be more interested to see if I experience any actual drop in search traffic.

Beyond writing posts and sharing them on my social networks, I didn’t actually do anything in September on the blog. So the slow, steady progress is just the existing content building on itself, really. 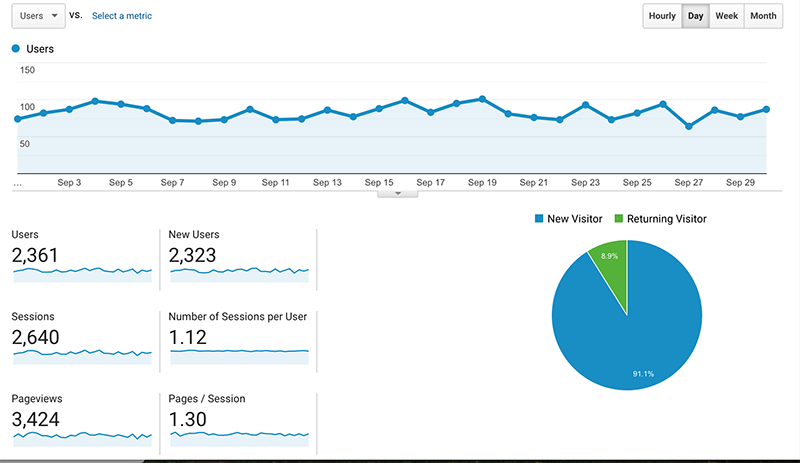 So, if I haven’t been doing much for the blog, where is that little bit of growth coming from? The answer is organic search. 2,067 of September’s visits came from search engines.

In July, I published two pieces of research-intensive content:

Are dogs allowed in restaurants in Europe?

Are dogs allowed in restaurants in North America?

As I’ve noted before: the reason I focused my energy on these is that my post on Are dogs allowed in restaurants in France? had quickly become one of my top search traffic drivers.

I did some digging and found that there isn’t much info out there on dogs in restaurants in most countries, so I took on a huge research project (still ongoing) in the hopes of publishing information on the topic for every country in the world (split up, as you can see, by continent).

Now that the posts have been out there for a couple months, I’m happy to say the Europe post is one of my top five most visited posts on the site. I’m still working on Asia, Africa, the Caribbean, etc., so hopefully there are some big jumps to come once I can get through those and publish them.

As usual, I spent $0 in my quest to grow the new blog. Honestly, I barely even spent time on the blog in September, between my client work and a vacation spent walking the pine forests and coasts of Estonia and Latvia.

As has been the trend so far, growth is on the upswing, but there are no dollars or cents to show for it. At this point, it’s rather unlikely that I’ll be getting income by the end of the year, as most affiliate programs pay out 60 – 90 days after a sale. But I’m hoping to have a bit more time in Q4 (though we shall see) to play with some possible monetization options.

I want these reports to be as detailed, interesting, and helpful as possible, so let me know if there’s something else you’d like to know or something I can do to improve them!

One Writer’s Shifting Mindset (Or What If Making a Point Isn’t the Point?)

Behind the scenes at my location-independent business, Q4 2020

8 Ways Blogging Has Helped My Career—Even Though I Don’t Really Make Money at...

Behind the Scenes at My Location-Independent Business, May 2017

How & Why People Buy Books: The Results of a 355-Person Survey

Behind the scenes at my location-independent business, Q1 2020