Popular posts
The cost of traveling Europe: real budget numbers from 9+ years of travel
A creepy Halloween cover reveal: The Wicked Unseen is here!
My secret news: I wrote a novel for Netflix!
The most (and least) dog-friendly countries in Europe
The most (and least) hiker-friendly countries in Europe
The ultimate guide to Europe’s digital nomad visas
How we define disability (and how maybe that needs to change)
How I make money while traveling the world full-time: behind the scenes with a...
So You Want to Freelance? Here’s How to Set Your Hourly Rates.
I Have OCD. This Is What It’s Like.
ask a local

Ask A Local: What Should I Do/See/Eat in Prague, Czech Republic?

In case you haven’t already heard, my lovely little guide to Prague is now available in both eBook and paperback.

In celebration, here’s an excerpt of one of the book’s 10 wonderful local interviews, designed to guide you through the usual and unusual, well-touristed and hidden-away wonders of fairytale Prague.

The fabulous interviewee sharing her insights with you today? Mirka Charlotte Kostelkova, the Prague Manager at Eating Prague Food Tours. As you might have guessed, she’s something of a foodie. Also, she loves hiking and has a real knack for history.

My name is Mirka and I was born here in Prague. I traveled for 11 years, living mainly in Paris, Uganda, Madagascar, and Hong Kong. Now, I am back in Prague working as Prague Operations Manager for Eating Prague Tours—a Czech food tour company dedicated to giving people a taste of local life and a unique culinary experience through Prague’ s cuisine and culture in a non-touristy way.

I love traveling and food (from cooking it to discovering and trying new restaurants to tasting new dishes from different parts of the world) and I think these two things go really nicely together.

When not eating or traveling, you can probably find me hiking and relaxing in a peaceful natural setting in one of the hidden Prague gardens or in the Czech countryside.

What To Do In Prague (The Basics)

The Old Town Square is located at the center of Prague’s medieval Old Town. Both tourists and locals meet up in this gorgeous open area after walking through the small and winding cobblestone streets of the city. It can get pretty crowded, but that’s only because it’s so beautiful and worth seeing.

In the square, you’ll find the Old Town Hall, built in 1338 and paid for by the duty levied on wine consumption. The famous Astronomical Clock is also here. Every hour, just before the hour, from 9 a.m. to 9 p.m., the skeleton on the right opens the clock doors by pulling on a string, while looking at the hourglass in his other hand. Then, the central windows open and the 12 apostles march across the clock. A cock crows to mark the end of the procession. The clock tower also features a calendar painted by famous Czech painter, Josef Manes.

Charles Bridge—originally known as Stone Bridge—is a historic bridge that crosses the famous Vltava River. Until 1841, it was the only way across the river, connecting Prague Castle to the Old Town and the surrounding areas. It is adorned with 30 statues of saints and lined with beautiful old-fashioned lanterns.

The Charles Bridge is a favorite location for artists, who set up their canvases and expositions along the side of the bridge for locals and tourists to admire. Beware of the bridge in the middle of the day, though, as it is packed with tourists taking pictures from all angles.

Malá Strana (or lesser town) is adjacent to the Prague Castle area and connected to the Old Town by the Charles Bridge. In the Middle Ages, German citizens were concentrated in this part of the city, which is home to a number of noble palaces.

Prague Castle is the ancient symbol of the Czech lands, ancient residence of Czech kings, current seat of the president, and a UNESCO World Heritage site. According to the Guinness Book of World Records, it is the largest coherent castle complex in the world, with an area of almost 70,000 square meters, including several beautiful gardens and an amazing cathedral. There’s no need to buy tickets and visit the interior. Instead, spend some time wandering around outside the castle and in the narrow cobblestone streets of the Hradčany and Novy Svet (new world) neighborhood, with its hidden stairs and old lanterns (best at twilight or evening).

The Lennon Wall is a colorful, gritty, historic symbol of freedom and rebellion against the communist regime in the 1980s. Don’t miss the love locks and the water goblin sitting on the mill wheel along the way.

Vysehrad is the second castle in Prague (or, really, not a castle, but the ramparts of a historical fort in a big park, a basilica, and an 11th-century rotunda, as well as a cemetery with the remains of many famous Czechs). Local legend holds that Vysehrad was the location of the first settlement that later became Prague.

On a beautiful day, grab a beer with the locals in the garden (e.g. Riegrovy Sady or Letenské Sady (sady is park in Czech) and stay for the views.

Charles IV’s gothic castle, Karlštejn, is one of the most popular castles in the country and the closest one to Prague (40 minutes by train).

Kutná Hora (a UNESCO World Heritage Site) with its ossuary (also known as the bone church) and St. Barbara’ s Church (one of the most famous gothic churches in central Europe) is amazing.

Český Krumlov (another UNESCO World Heritage Site) is a beautiful and culturally rich city in South Bohemia dating back to the Middle Ages and featuring a 13th-century castle and castle theater on the banks of the Vltava River.

For outdoor enthusiasts, hiking among beautiful sandstone rock formations at České Švýcarsko (literally translated as “bohemian Switzerland”), Hřensko, and Pravčická Brána is a must. Don’t miss the idyllic boat trip past the gorges.

Start with open-face sandwiches (this has been the cornerstone of Czech cuisine for 100 years). Try the traditional ones at Deli Jan Paukert (at Narodni 981/17) and the awesome modern version at the Bistro Sisters (at Dlouha 39).

Then try the Přeštice pork sausage—an exceptionally tender and juicy pork from a local heritage breed and one of the finest smoked meats in Prague. Other fine smoked meats include an amazing Czech meatloaf and Prague ham, which can be tasted at the butcher shop Nase Maso at Dlouha 39.

Next, enjoy the traditional South Bohemian sauerkraut soup. My favorite one is in the Zvonice Restaurant (at Jindřišská Věž). It’s a unique setting in a perfectly preserved 600-year-old bell tower that looks down over the rooftops of Prague. The 10th oldest bell hangs between the two floors of the restaurant and views include Prague’s 103 spires.

Arguably the most traditional of all the Czech dishes is svickova (braised beef sirloin in creamy sauce, cranberry compote, and Czech bread dumplings). The best in Prague can be tasted at Cafe Imperial (at Na Poříčí 15)—one of Prague’ s big historic Habsburg-era cafes, a national monument, a UNESCO World Heritage Site, and a hot spot for gorgeous ceiling mosaics and interior design (don’t miss the golden swans in the bathroom). It’s also famous for being the site of the “doughnut wars” (e.g. in the past, you could buy a plate of stale doughnuts at throw them at people). And the meat here is so tender that you barely need a knife to cut it.

Where to Eat (Favorite Bars & Restaurants)

For wine (including a good Czech selection), go to Vinograf (at Senovážné náměstí 23 and Míšeňská 68/8). Try a good Moravian wine recommended by the staff there. I also recommend Veltlin at Křižíkova 488/115 in the Karlin neighborhood.

For drinks with a view in the summertime, the quaint rooftop terrace at Sluneční Terasa T-Anker can’t be beat. To get there, you’ll need to go to the department store Kotva at Náměstí republiky 656/8 and head to the fifth floor (use either the separate entrance and lift directly to the fifth floor or enter the department store and head on up). For reservations, call +420 722 445 474

How to Fit In

When riding public transportation, always offer up your seat for an elderly person or a mother with children (that goes for pregnant women, as well). Many times, they’ll decline the offer, but it’s an important gesture in our culture.

Also, loud boisterous chatting may draw glances (possibly even sneers) when not at rowdy places. While we aren’t necessarily a quiet culture (we really like to talk!), we will notice overpowering voices (and probably not like it much).

Best Places to Take a Photo

The classic ones would be from Charles Bridge, Kampa Island, or the Prague Castle area.

A few other favorites of mine include: atop Vyšehrad, where you can walk along the old historic wall and capture 360-degree views of the city and beyond; Letna Park, where you can snap sweeping city shots while having a beer and sausage in the garden and strolling around the park’s paths; and Lennon Wall, whose colorful graffiti makes everyone look cool against it.

Prague emanates magic and mystery and offers a mix of medieval and contemporary architecture, modern streets and old cobbled lanes, communist-era grey and colorful graffiti, strong local tradition and cosmopolitan influence. There is something special and real about Prague.

Prague has incredible layers and depth. It’s willing to share; you’ve just got to let it. And once you do, as Franz Kafka said, “Prague doesn’t let go. This little mother has claws.” 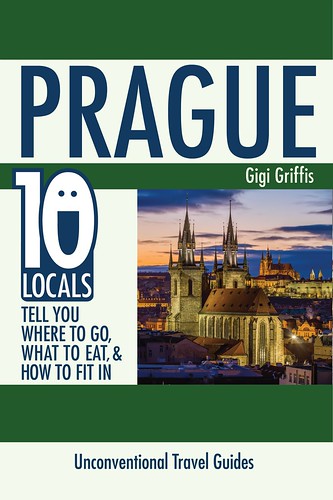 Love what you read? Get the full interview (and nine others!) in Prague: 10 Locals Tell You Where to Go, What to Eat, & How to Fit In.

Ask a Local: What Should I Do/See/Eat in Amsterdam?

Ask a local: what should I do, see, and eat in Santo Stefano Medio,...

Ask a local: what should I do, see, and eat in the Aosta Valley,...

Ask a local: what should I do, see, and eat in Palazzo D’Assisi, Italy?

Ask a local: what should I do, see, and eat in Pompei, Italy?

Like the word itself, the “práh” has been very much a stepping stone and threshold to a different world, one which I’ve thankfully discovered and fallen in love in the city of Praha. Many visits later, I’m still finding new things to explore. Thanks for your post, Gigi!

Glad you enjoyed it!

Thanks for publishing this interview with our very own Mirka! We love it :-)