A content warning (or trigger warning) is a notice about potentially sensitive content. It gives people with mental health triggers or past trauma a way to either prepare themselves or opt out if the content is too much for them.

It’s like in the movie industry when something comes up as “rated R for violence and language”—the warning gives you a sense of what is coming and whether it’s for you.

This includes both when you depict those things on page and when they are backstory or character fears (or otherwise internalized). For example, if you have a character who is anxious about dying and thinks about it often, even if there is no death on page, you may want to include something like “death anxiety.”

Including a content warning for violence may be helpful. But including a more specific warning like “domestic physical abuse” or “police violence” is often more helpful. Some people can watch Die Hard, no problem, but want to avoid depictions of domestic abuse, child abuse, or police violence because of their individual backgrounds or traumas.

Don’t use identities as triggers

Don’t stress out about it

There is simply no way to know every trigger for every person. Do your best to think about what in your manuscript might feel traumatic to someone, but don’t stress yourself out about it.

As someone who has had to put books down over enthusiastic descriptions of nosebleeds because of my bodily fluid-related intrusive thoughts, I’d love to see bodily fluids listed in a content warning, but I also understand that most people simply wouldn’t think of them as a possible problem. I’m never mad that an author didn’t think of it. But I’m always thrilled when they do. 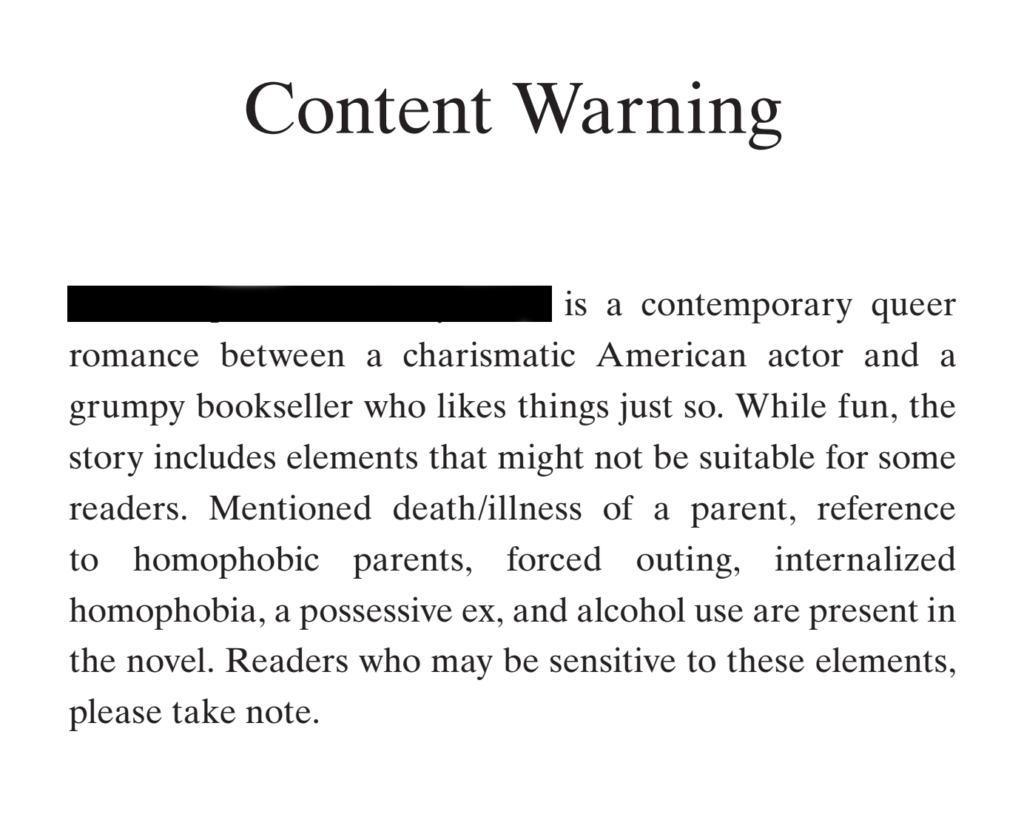 While content warnings can be nice to have for everyone (sometimes you’re just not in the right headspace to read about abuse), for trauma survivors and mentally ill folks, they can quite literally save us from flashbacks, anxiety/panic attacks, nausea, nightmares, intrusive thoughts, and other physical and mental symptoms that can last hours, days, or longer.

Those of us who need these warnings thank you!

Not necessarily! Some people will opt out. Others will recognize that they need to be in the right headspace when they read (and will plan accordingly). And still others will go ahead and read—after having mentally prepared themselves for the content (and appreciative of the warning).

The Longevity of Loss

Love Means Standing Up For Yourself