October report: can blogging be profitable?

Welcome back to my blogging experiment.

As you may already know, in January, I started a brand new blog with the goal of seeing if I can make money through blogging within a year. Every month, I share some details as I work (in my spare time) to see if I can grow said blog to a point where it starts earning some money.

October’s a wrap. So let’s see where we’re at.

What I’ve been up to

In October, my schedule opened up ever so slightly (at least in part because I took a vacation and ended up doing some blogging then) and so I devoted a bit more time to Vicious Foodie than I have been for the past few months.

I wrote and pre-scheduled something like 20 posts and went from posting once a week to sometimes two or three times in a week. Since my content is starting to rank better and better in search, I thought amping up production might help me get a nice little jump in the numbers.

As you know, SEO takes time, so I didn’t expect all that content to start ranking right away. But up it went, and we’ll see how it goes.

The majority of the content was my usual fare – restaurant reviews, info pages on farmers markets around Europe, interviews with chefs. But I also managed to publish another in my series of “are dogs allowed in restaurants in X country” posts.

This one’s for Asia and Oceana. I had a couple countries that I couldn’t for the life of me find info on, but I decided to publish anyway, with caveats on those few countries.

Several of the other dogs in restaurants posts are doing well in search, so we’ll see how this one fares. If it doesn’t get a ton of search traffic, I may decide it’s not worth it to continue researching for my planned Caribbean, Africa, and South America editions.

Let’s get snarky in here

When I first started the new blog, there were a few things I wanted to try.

There was this experiment, of course. Can a brand-new blog with no domain authority make money within a year? How fast could I build up search traffic? How well did I know my stuff when it came to creating content for SEO?

And the other thing I wanted to try? Letting loose my snarky side.

I was so tired of blogs that raved about mediocre food. I was tired of reading great reviews of restaurants only to get there and find out they were tourist traps. I was so tired of food writers not telling it like it is.

And so I wanted to do not only reviews on my favorite places, but also reviews on the worst of the worst.

Of course, as soon as I decided to do that, I mysteriously stopped finding truly terrible restaurants. Don’t get me wrong. We ate plenty of mediocre food. But it didn’t feel that interesting to write a review about the mediocre.

In September, though, I had a truly horrible food experience at a cafe in Riga. And so when one of my best friends wrote to ask where the vicious parts of Vicious Foodie were because she’d love to read about some truly horrible food, I knew it was time to unleash some snark.

And so up went my first “vicious” review. And I saw a nice little spike in traffic. So there will definitely be more of those coming.

The slow, steady growth continued in October, jumping to 2,419 users and 3,722 page views. You’ll notice in the chart below that views hold steady most days between 80 and 100, but the day I published my snarkier post, late in the month, views about doubled. 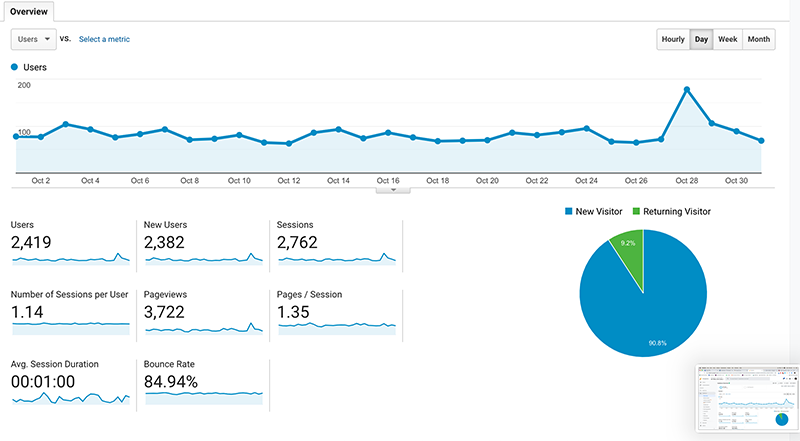 As usual, Google is responsible for the large majority of my blog traffic. The current posts getting the most search engine love are:

:: Brittany food: what to eat while traveling Bretagne

:: Are dogs allowed in restaurants in France?

:: Are dogs allowed in restaurants in Europe?

As usual, I spent $0 in my quest to grow the new blog.

In October, I had two inquiries about sponsored posts, but I’m still waiting to hear if they want to move forward. At this point, I think it’s unlikely that the blog will earn anything within a year of its start date. But it been interesting to see how fast it can grow and whether my old standby SEO tactics still work.

For a blog that started with absolutely nothing – no domain authority, no content, no big company pouring money into its growth – I’m rather impressed to see it inching toward 4,000 monthly visitors by the end of the year. And that’s with relatively little effort on my part, as I only really did the bare minimum to keep things rolling for the last six months.

There’s still a slim chance one of those sponsorships will come through and the first payment will hit the bank before 2019 draws to a close, but with or without it, I’m rather happy with this experiment so far.

I want these reports to be as detailed, interesting, and helpful as possible, so let me know if there’s something else you’d like to know or something I can do to improve them!

How Fast Can Blogging Become Profitable? An Experiment.

Behind the scenes at my location-independent business, Q4 2020

Behind the Scenes at My Digital Freelance Business, February & March 2017

Behind the scenes at my location-independent business, Q4 2019

its looking great, congratulations Gigi… I am foodie myself, really looking forward to some great recipes :)