Eating Only Locusts, Drinking Only Dew

My first day in town, we sat on the beach with our beers watching this guy.

I made a new friend within 24 hours of arriving in Sayulita.

He’s a tanned Australian guy with long dreadlocks and bare feet. He’s been traveling for seven years, and hasn’t worn shoes for most of that time (when he came to the US recently, he had to buy a pair of shoes for the first time in two years because none of the stores would let him in without them; this baffles him about our culture).

He’s been in Sayulita for over six months, working at a little juice bar in town and making plans to start an organic farming business after the rainy season (which is fast approaching). And when we walk down the street, everyone knows him; everyone stops to greet him.

“I love you, man,” one local man enthused, offering a hunk of fresh fish he’d just been cooking over an open fire.

He’s what I imagine the Jewish prophets were like. You know, the ones from the old testament—the kind of guys you could imagine fasting in the desert for forty days, eating only locusts and drinking only dew. 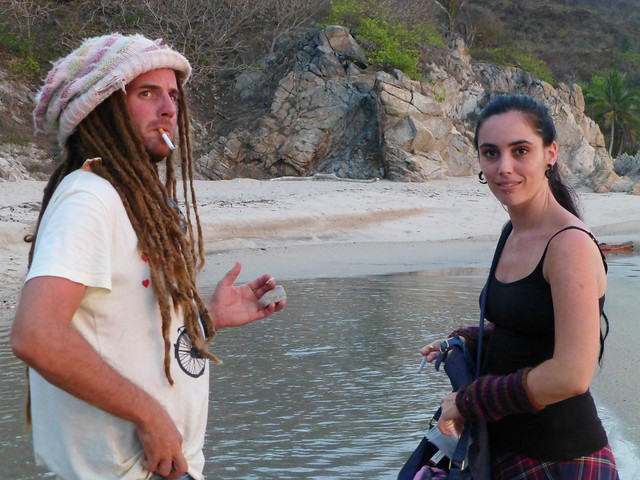 I (obviously) find him utterly fascinating.

When I ask him about his life, he says that he could make great money back in Australia. He owns a business (which his brother has been keeping up for him). He’s a hard worker. He could be “successful.” But he really likes his life right now. So why go back?

“What is success anyway?” I offered. “Isn’t living on a beach in Mexico what the whole success thing is about?”

We also talk about not worrying, about living in the moment. He tells me that his birthday is coming up this Friday and he’s throwing a party complete with margaritas and a bouncy castle.

I laugh out loud because the idea of an adult party with a bouncy castle is utterly delightful. And when I attend the party, I find that there’s also face painting (which quickly becomes body painting, because that’s what happens when you put paint, margaritas, and 20-somethings in the same room).

He’s a good reminder for me, this man. So unruffled, un-rushed, content with his life. Delighting in bouncy castles and a simple life of working at a juice bar and wandering the beaches barefoot.

A reminder that worrying gets you nowhere, and that trusting that things will all be okay is a much better life philosophy.

As always, I’m grateful for the reminder.

A Week in the Life of a Digital Nomad, NYC Edition

Photo Essay: Walking the South Rim of the Grand Canyon

I love these types of reminders. Thank you for sharing!

Great reminder especially since I needed it. Thanks.

[…] haven for deep thinkers and peace-seekers, conspiracy theorists and long-time travelers, and all of the most quirky, ridiculous characters you can […]