Search for the best pizza in the world and you’ll come up with plenty of claims. Romans feel strongly about their world-renowned thin-crusts. New Yorkers line up for hours to grab a Brooklyn pie at Juliana’s. And Chicago will fight them for the title.

And then there’s Napoli (Naples).

This is where pizza was born, and it’s not hard to argue that it’s still the best place to have a pie in 2019.

A short history of pizza

Before pizza came to be, Italians enjoyed focaccia bread covered in toppings. And they weren’t the only ones. Traditions from cultures around the world boast simple breads with toppings.

Naples’ claim to fame is that it added tomatoes to the mix. The interesting thing about this is that Italians thought tomatoes were poisonous at the time because the aristocrats started eating them and dying. The real reason was that they were eating off plates with high lead content. The acid in the tomatoes would leach the lead from the plates. The aristocrats would chow down. And – et voila – dead aristocrats. Poisoned by lead.

And so tomatoes were fruit non grata in Italy for a long, long time. Until the poor people of Naples, undernourished and much more willing to take chances on dangerous fruit, started adding tomatoes to their flat breads. The poor didn’t have lead plates, and since they were getting along just fine eating tomatoes, the trend started to catch back on. By the early 1800s, there were 54 pizzerias.

Then, in a stroke of genius in 1889, pizza-maker Raffaele Esposito covered the crust in tomato sauce, mozzarella, and basil – red, white, and green – to represent the Italian flag. He presented his creation to Queen consort of Italy, Margherita of Savoy and named it after her.

Today, you’ll see pizza Margherita on pretty much every menu in Italy.

So Naples is the birthplace of pizza, but is it just a long history that gives it a claim to the title of world’s best pizza?

There’s also the Associazione Verace Pizza Napoletana – a very serious association that has set rules for what authentic Neapolitan pizza is (wood-fired, hand-kneaded, with a specific diameter and thickness of crust). And then there are the tomatoes. The best tomatoes, they say, are grown in the volcanic soil on Mount Vesuvius, just down the road from Naples.

Which is why when Chad and I made our way from Rome to Naples on a quest for the world’s best pizza, we had high hopes… 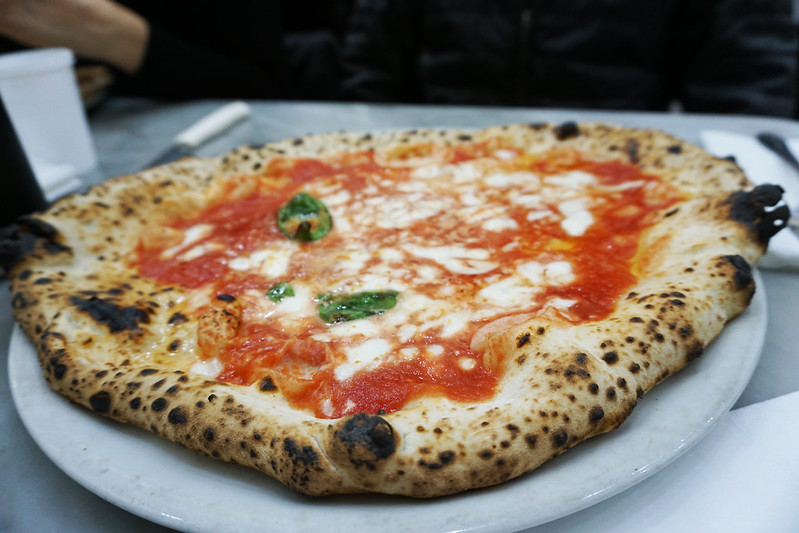 …And we weren’t disappointed.

Take a number and wait in line, because this pizzeria is hopping. People will wait on the sidewalk outside for hours to get a pie. The earlier you arrive, the less you’re likely to wait (Italians tend to be late eaters).

Once you’re ushered inside the pizzeria, don’t expect anything fancy. Tables and pushed close together. The tile walls and simple tables are nothing to write home about.

But none of that matters once you order.

Because the pizza is what’s worth writing home about.

It’s what’s worth the long wait. The train ride from Rome. The walk through Naples gritty, less-than-pretty streets.

Chewy crust with just a hint of wood-oven char. Thick, tangy, sweet sauce. Pools of melted cheese. And a snap of basil.

Most of the people around us ordered a whole pie each, digging in with knife and fork and devouring every bite. Chad and I settled for splitting one, but I could have easily joined my neighbors in eating past when my hunger disappeared, just for the pleasure of the flavors bursting on my tongue.

We sat there in quiet contentment after the last bite, then paid the bill, which came out to about $6.

(I mean, not counting our train tickets from Rome.)

Are dogs allowed in restaurants in Italy?