Popular posts
What happens to digital nomads during a pandemic?
The cost of traveling Europe: real budget numbers from 7+ years of travel
The cost of living in Estonia: my real spending for a month in Tallinn
We got D visas in Estonia. Here’s how
The Most (And Least) Dog-Friendly Countries in Europe
The best hikes in Europe, according to a wilderness-loving writer
How I make money while traveling the world full-time: behind the scenes with a...
What to eat in Slovenia (and where to eat it): An interview with Ana...
So You Want to Freelance? Here’s How to Set Your Hourly Rates.
I Have OCD. This Is What It’s Like.
stories & photos 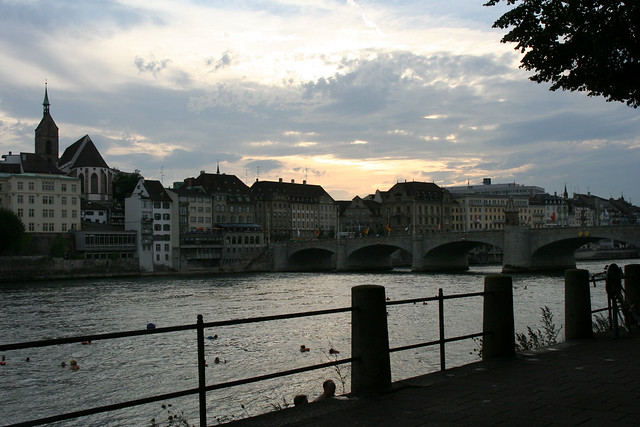 Here there be hilarity.

Well, ladies, I have apparently figured out the secret of attractiveness: carry a giant backpack all morning, sweat a lot, don’t wear makeup, forget to shave your legs, and then go sit on a park bench in Basel.

Allow me to explain.

I left my gorgeous Freiburg apartment on Wednesday morning, carrying my hiking backpack, trailing a sad-to-be-leaving Luna behind me on her leash the kilometer or so to the train station, and arriving hot, sweaty, and extremely excited. Just in case I haven’t mentioned it enough: I love Switzerland. This is one of the very few times in my travels (so far) that I’ve returned to a country (let alone a city or two), because the week or so I spent here last time just wasn’t enough.

So there I was, Wednesday morning, boarding a train in Freiburg for the short trip to Basel, Switzerland, where I would spend the first two days of my first vacation in two years. Life was most definitely good (albeit sweaty).

After arriving in Basel, locating the apartment, and leaving my bags, Luna and I headed toward the city center and the ever-stunning Rhine, where – due to excessive heat – we sat for a moment on a park bench in the shade…right next to one of the more handsome men I’ve seen lately.

This is where I should digress and tell you that, in addition to sweating all morning, I had (as you may have guessed from the intro to this entry) also failed to shave my legs or put on makeup. So when you imagine me, imagine me somewhat disheveled, but very happy.

And then imagine the tall, dark, and very handsome man on the park bench turning to me and striking up a conversation.

As the conversation progressed, I learned that he lived in Spain and was visiting a cousin here in Switzerland. He’d just come from the Bernese Oberland (next stop on my itinerary) and fairly recently broken up with a girlfriend (he was very keen to make sure I understood that he didn’t currently have a girlfriend). After a couple hours, he said goodbye, kissed me on both cheeks, and then kissed me full on the mouth and invited me to Spain.

Apparently, shaving your legs is overrated.

Did I mention that he was seriously handsome?

After he left, I sat on that bench for another few minutes laughing to myself. What a hilarious, unexpected afternoon.

As I was sitting there, grinning like a fool, an older gentleman sat down next to me, quickly striking up a conversation with me about the dog and my accent (two things that never fail to be conversation starters). He then asked if my birthday was in April or September.

“September,” I said, curious as to where this was going.

“I can sense people sometimes,” he said.

“Yes, I sense things about people.”

This, of course, led to an interesting conversation and a free palm reading. He had some things right and some things wrong, as you’d expect. But he also had plenty of sound advice, like:

“Hope is so important. Every morning, you should wake up with hope. Hope that today good things are coming for you.”

“People aren’t beautiful of their own accord. We are the ones who make people beautiful. By choosing to love someone, you make them beautiful.”

Then he gave me a hug, told me to email him, and set off for home.

I kept sitting for a while, still grinning like an idiot, because this is just the kind of ridiculousness I love. Sitting on a park bench, listening, gathering up stories and wisdom (and kisses) with a new city as my backdrop.

After a brief intermission, in which Luna and I went and got ourselves some more water, we again sat down on (or, in Luna’s case, under) a waterfront bench. This time I put in my earphones and people-watched…but not for long.

Very soon, a man walked up, talking excitedly. I took out my earphones and he asked if we could have a discussion (one of those funny English as a second language mistakes that isn’t really a mistake, but isn’t quite the right word either).

“Oh, and what do you want to discuss?” I asked, amused.

Turns out what he wanted to discuss was A) that he was drunk, B) that I look friendly, C) that I have a great body, D) that he never “made sex” with his last girlfriend, and E) would I like to come to his house?

I pulled out the imaginary boyfriend card, telling him I was with someone and he wouldn’t like it and sorry.

[Short aside: when I make up a boyfriend in an effort to make a man go away, I always pick a real guy and manufacture a relationship with him. So, if you know me and you are a dude, know that I have probably manufactured a relationship with you in order to deter an unwanted advance. You are, consequently, my hero.]

But I digress (again).

Eventually, I told him I had to go. He hemmed and hawed, but didn’t follow me home, so…another win.

And so ended my first day in Switzerland – a day full of strange encounters.

Clearly, this is the start of a beautiful vacation.

Going to Switzerland? My unconventional Switzerland guide (with 100 local interviews) just published! Get your copy now.

Europe in Review, Part II: Summer By the Numbers

Photo Essay: The Island of Solta

A Day in the Life of a Full-Time Traveler

SWEET!!! how totally random and awesome!

oh you must tell me if (last year) you ever emailed the palm reader!

I shall be in Switzerland vicariously through your posts. thanks

I never did. I only had one day left in Basel and spent it in part with my couchsurfing host.

[…] Most hilarious moments of the year: – That time an Australian man in rainbow speedos attempted to seduce me in a Belizean hostel. – That time that my roommate got a mysterious package in the mail…and it turned out to be an adult diaper – That time I got my palm read by a stranger in Switzerland right after another stranger kissed me and right bef…. […]